[Books in brief]Bearable anomie of the soul

[Books in brief]Bearable anomie of the soul 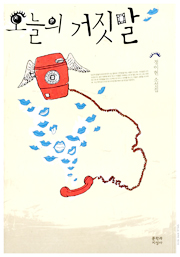 In “The Solitude of Others,” from “Today’s Lies,” Jeong I-hyeon’s collection of short stories, the author explores the relationship of a young couple who get divorced after being married for a year. Following their divorce they get busy with blind dates set up by their parents through matchmakers. The separated couple remain “friends who are not too close, not too distant.” The friendly aspect starts to dissolve when the heroine’s new boyfriend says he can’t stand a dog that was raised by the divorced couple. She gives the dog back to her ex, who does not want it and they embark on an intense battle over who should be forced to have custody of the animal. The dilemma ends when the man gets into a car accident with his ex-wife in the passenger seat and bolts from the scene. As a condition of keeping the accident a secret she insists that he raise the dog.
The collection, which consists of 10 stories, is set in a landscape of urban contemporaries who live in a state of anomie. The characters in the novel perform illicit acts, deny tensions in their lives and find ways to justify their behavior in order to live in comfort. In “Molar,” a father pays an enormous amount of compensation to cover for his son, who killed his underage girlfriend while he was driving drunk. In “To Anonymous You,” a nurse hires a private investigator to defend her doctor boyfriend who is suspected of sexually harassing a female patient. The book reads a bit like a trendy TV mini-series, but it also makes one feel sympathy for young Koreans who, on the basis of this book, seem to live complex and confusing lives.