On the slopes music absorbs sting of defeat

On the slopes music absorbs sting of defeat 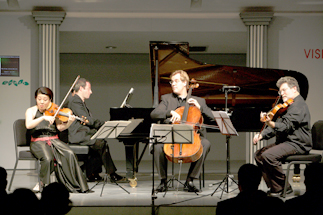 Artists play Brahms’s Piano Quartet No. 1 in G Minor, op. 25 during the opening concert of the Great Mountain International Music Festival on Thursday. Provided by the organizer

There’s something irresistibly charming about a small town classical music festival. It has a naivete which professional classical music in the big city often lacks, especially in a country where the genre is associated with the expensive lifestyle habits of a privileged few.
There is even more charm if the town is Pyeongchang, home of the ski resort that still hasn’t recovered from the shock of losing the bid for the 2014 Winter Olympics last month to the Russian city of Sochi.
So what better consolation could there be for wounded souls than the gentle harmonies of chamber music echoing through its forests?
Indeed on the opening night of the Great Mountain International Music Festival on Thursday, which was called “Visionary,” Kim Jin-sun, the governor of Gangwon, made his eagerness to move on from the Olympics very clear when he announced that the local government is currently working to transform the town from a ski resort into a music art village.
“Through music, we will prove that the town can overcome all kinds of barriers,” he said.
The annual festival, which is taking place for the fourth time, has an unusual sense of community that conveniently leaves out many bureaucratic conventions common found in the classical music scene in Korea, including their way of feeding meals to artists, students, teachers and journalists in the festival’s cafeteria with a humble yet pleasant buffet that creates the mood of a summer camp.
Maybe the chemistry of the student-teacher dynamic in the festival’s music school has something to do with it. A concept embraced by the Great Mountain festival, young music students, both local and international, are trained through a series of lectures and workshops.
Or maybe it’s the sense of intimacy shared among the festival’s organizers, who are mostly made up of musical partners and faculty colleagues of Kang Hyo, the festival’s artistic director and a professor of the Julliard School of Music.
Or it could be simply the experience of being let inside the reality of a classical musician’s life, constantly hearing young artists chatter in the hallways as they move between rehearsals or see cellists sweating as they try to climb up the stairways with their instruments on their backs.
Then, of course, there is the sense of place created by the pastoral landscape of the festival’s setting mixed with the themes of classic music, all in a ski resort close to the North Korean border.
Considering the town’s transformation, it’s not a surprise that the festival’s benchmark model was the Aspen Music Festival, which helped transform a deserted mining town into a resort for millionaires.
Overall, the festival’s opening weekend faithfully nourished what appears to be the democratic ideals of music, in many ways.
Musically, it had much to offer from Bach and Debussy to innovative contemporary composers including Gyorgy Kurtag, Gyorgy Ligeti and Tan Dun, whose “Elegy: Snow in June” was performed on Saturday by Andres Diaz and Alex Hepfer.
Performers from the opening concert, which included Haydn, Elgar and Brahms, received a long-standing ovation in a full theater despite a night of pouring rain, which always disrupts the town’s peace at this time of year. (The floods that hit Gangwon last year turned the festival’s concerts into a fundraising event).
The Asian premiere of “Murmurs in the Mist of Memory,” a four-movement work by Augusta Read Thomas, was also one of the opening highlights
One of the most memorable moments of the opening night, was a performance by Norman Perryman, a kinetic artist who used overhead projectors to show illusions of movement through his brushstrokes during a repertoire of music by Thomas.
Perryman created an abstract illusion of spontaneity on screen, building a layer of visual experience on top of the music that was being performed on stage ― all part of a drive by the festival’s organizers to reflect on and revive forgotten visionaries of classical music.
myfeast@joongang.co.kr

The Great Mountain International Music Festival runs through Aug 26. There is a shuttle bus that runs from Seoul to Yongpyeong Resort every day at 9 a.m. and 1 p.m., stopping at Jamsil Station (exit No. 4) and Jamsil Sports Complex Stadium. Tickets start from 20,000 won ($22). For more information call (033) 249-3374.