A Shakespearian tale of tragedy and tears has some redemption

A Shakespearian tale of tragedy and tears has some redemption 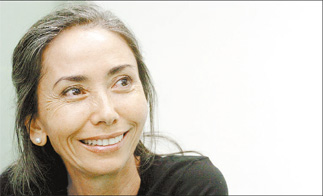 In Shakespeare’s “All’s Well that Ends Well,” the playwright wrote, “Praising what is lost makes the remembrance dear.”
Mun Suk, 53, has just published a book in the same vein. Titled “The Last Year” it honors the memory of her lost love, Lee Man-hee (1931-1975).
Mun was a leading actress in Korea during the 1970s, starring in “A Road to Sampo” (1975) and “A Girl Who Looks Like the Sun” (1975), both of which were directed by Lee.
Lee directed numerous movies during the golden age of Korean cinema in the 60s and 70s, such as “Marine Corps Who Never Return” (1963), starring Jang Dong-hwi and Choi Moo-ryong, that examined the brutality of the Korean War and the sorrow that followed.
“The Wild Flowers in the Battle Field” (1974), starring Shin Seong-il and Lee Young-ok, also depicts the tragedy of the Korean War and the violent struggle between the two divided nations, told through the eyes of a young boy.
Mun and Lee ― the most prominent symbols of Korean cinema during this era ― were lovers. The two fell in love when they met during the auditions for Lee’s A Girl Who Looks Like the Sun. Mun was seeking a part in the film.
“My heart skipped a beat when my eyes met his,” said Mun, “My mind went blank for a while.”
Lee felt the same and the two soon began to live together at Lee’s home in Jayang-dong.
Mun was only 20 years old and Lee was 43.
The public was scandalized by the age difference but the couple did not care. Less than a year after their first meeting Mun and Lee were married privately in a small temple. “That day, Lee gave me a golden ring,” she said.
But, true to Shakespeare, their love gave birth to tragedy when Lee suddenly died in 1975, just 18 months after they first met. Heart-broken, Mun left Korea in 1977 and never returned. 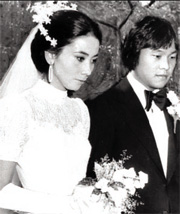 Her second marriage in the U.S. ended in divorce and she spent the rest of her life as a painter. She purposely devoted herself to painting as a way to recover from Lee’s death.
But her mind was continuously swamped with feelings of hatred, abhorrence and guilt. She was haunted by mixed feelings toward Lee for leaving her behind, and herself, for being powerless and unable to protect him from death.
In the end Mun decided she could not find peace until she wrote a book about her tragedy.
She made this decision after she saw A Road to Sampo in 2004 in New York. She starred in the film, playing Baek-hwa ― her performance gave her victory in the best new actress category at the 1975 Daejong Awards.
The last time she had seen the movie was at a 1975 preview. In New York, sitting next to Hwang Suk-young, who wrote the screenplay, she began to cry because the preview had taken place right after Lee’s death.
“I was able to see my love breathing in every scene of the film,” said Mun. “That’s when I decided to accept the tragic past with love, instead of avoiding it with pain.” She added, “I feel easier with the public that now I’ve shared the past 30 years.”
In her book, Mun notes her relationship with Lee’s youngest daughter Lee Hye-young, a 45-year-old actress. Mun wrote that the three of them ― Lee, his daughter and herself ― spent their first night together at Jayang-dong.
“I fell asleep between the two of them,” said Mun. She also remembered going shopping for Hye-young’s school supplies.
Mun decided she had to keep in touch.
“I called her a few days ago and Hye-young greeted me warmly,” Mun said. With her recent book published, Mun suddenly decided to visit Korea.
“I believe that the pure love once shared by myself and Lee is still in progress somewhere, even at this moment,” she said.