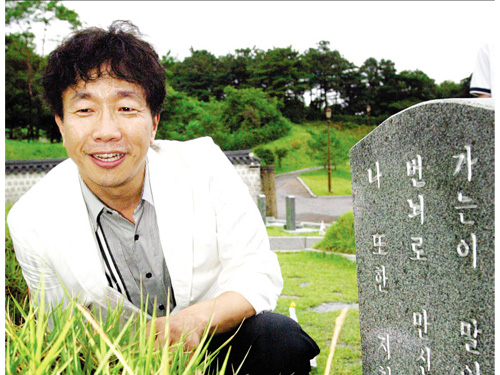 Park at the grave of a school friend who died during the 1980 Gwangju uprising. He was at school in the city during the massacre. [Yonhap]

Park Cheol-min, one of the actors starring in the hit movie “May 18,” which tells the story of the Gwangju massacre, has a long relationship with the city where the democracy movement rose up against violent oppression by the Korean military in 1980.
Park is a native of Gwangju, and was in his second year of middle school when he witnessed the uprising. His film debut was in a movie about the events of May 1980 and he has played a small role in another Gwangju film called “Kkotip,” which means petal.
Park said he lived in a remote part of Gwangju and he would visit the downtown area on his bicycle.
“It was an interesting scene with tires being burned and people wailing,” Park said. He said it was odd because what he witnessed on Gwangju’s streets and the Gwangju he saw on TV news were very different.
Now, 27 years later, Park has played the role of In-bong, one of the many Gwangju taxi drivers who blocked the roads and honked their horns in support of the democracy movement. In-bong wears flashy shirts and exchanges jokes with soldiers, making them smile as he stands on the front lines of the protesters.
In a film where tears dominate, Park’s character gave the audience a few moments of comic relief.
Park has a reputation as a comic actor. He became widely known for his role in “Mokponeun Hangguda,” or “Mokpo ― The Harbor,” which was also the debut for May 18 director Kim Ji-hun.
In Mokponeun Hangguda, Park played a gangster who has more skill with words than punches. Although his role in the film wasn’t large, his non-stop impromptu speeches were engaging. The line that knocked out the audience came when he was shadow-boxing. With his mouth he was making the sound of punching but as he was doing so he said, “I’m not making this sound with my mouth.” That line was enough to make him a well-known celebrity. 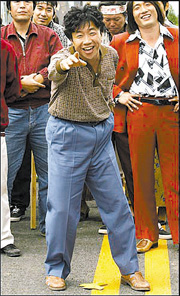 His comedic talent has been on display in other productions. The words that he delivered while playing the role of a military official in a television drama about the life of General Yi became so famous that several Internet Web surfers made a list of all his best lines. At the 2005 KBS annual awards he was named best male supporting actor for his role in that television show.
The comic acting that Park is famous for looks easy, but it’s not. Park said he rehearsed rigorously for his three minute comic scene in Mokponeun Hangguda. He said he even prepared several versions of the same scene and showed them to the director and his staff while they were filming May 18.
The scene that Park said he wished he had done better was a comic scene where he parodied an 80s orange juice commercial.
The commercial’s catchphrase was “shake it” and In-bong shook his bottom while drinking the juice in an attempt to make his fellow protesters laugh.
Park said a lot of people enjoyed the scene when it was being filmed. However, it was removed from the final cut because the next scene showed military intelligence operatives conducting wiretapping.
“They said, by contrast, the juice scene stood out too much,” Park said. It was the same reason that critics harshly criticized the scenes where In-bong and his partner were fooling around.
Park, however, said he saw it differently. “When people are scared, sometimes they fool around more to hide their fear,” Park said. “The intelligentsia might write serious letters and so forth but the commoners pass on jokes. Gwangju was an oasis of freedom that was created by the people of the city after they had driven out powerful groups. At the time people were singing songs and making fun of the military and dancing the dance of freedom. Humor was bound to have a place in that.”
Park said it was because of their comic acting talent that In-bong and his partner, while shedding tears for the other protesters, bowed in the direction their mothers’ houses and thus made the scene emotionally powerful.
Park said he actually wanted to major in film and acting in college.
But because of his father he had to put management studies as his major on his college application.
However, where there is a will there is a way. In college Park joined a small thespian community and spent many days chasing pigeons around the campus grounds in order to refine his comic timing.
He soon took to the stage and started performing. He was once chosen as one of the year’s five best actors by the National Theater Association of Korea.
He then appeared in several Korean films but his big break came when he got his part in Mokponeun Hangguda.
Park has made many May 18 audience members cry with the scene where his character leaves his wife and baby to participate in the movement’s protests.
Park will be returning to Gwangju soon to act in a movie about one of Korea’s most beloved baseball pitchers, Sun Dong-yuhl.
The movie, called “Scout,” revolves around a baseball coach who travels to Gwangju to appraise Sun. In this movie Park will leave comedy behind to play the melodramatic role of a man deeply in love with a woman. Although this is not his first romantic performance, Park said he is looking forward to playing a non-comedic role. 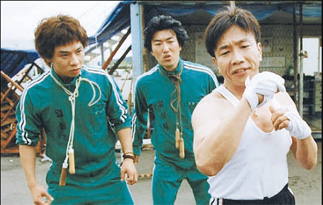 Park in “Mokponeun Hangguda,” his breakout role. Provided by the producer

“I wasn’t sure if I could play this role but I have found that within Park Cheol-min there are many characters,” he said. “It was a role I have never played and now I have learned what it is like.” He said he enjoyed playing a romantic role and from now on he will not refuse offers to appear in romances.
Park said in filming May 18, for more than half a year, he enjoyed the rehearsals, which took place in front of the movie crew.
“When the crew, who were working so hard in the heat, stopped to laugh and enjoy my acting, that’s the same as handing each and every one of them an ice cream cone,” Park said.