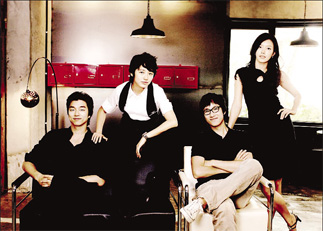 The main cast members of the hit TV show Coffee Prince Branch Number One. The heroine, Yoon Eun-hye, is second from the left. [JoongAng Ilbo]

When the movie “Moonlight Melody” was first released in 1984 it became the center of vigorous debates because it hinted at an intimate sexual relationship between two men.
Twenty-three years later gay relationships have become part of the landscape in Korean media. Affectionate hugging or exchanges of intimate looks between two men no longer offend viewers. In some cases such affectionate relationships are the focus of the most popular shows.
“Coffee Prince Branch No. 1,” currently running on Monday and Tuesday nights at 10 p.m. on MBC TV, exploits this cultural development. It has built a large following that is fascinated by the relationship between the two main characters.
As of Aug 13, TNS Media Korea, a television rating company, said Coffee Prince had won an audience rating of 29.3 percent, a clear lead over its competitors on the other two major networks. SBS gets a rating of 15.9 percent for its 10 p.m. slot while KBS 2TV has a 5.7 percent share.
The show’s popularity has persuaded the producers to increase the number of episodes for the first season from 16 to 18.
The heroine, Goh Yae-chan, played by the actress Yoon Eun-hye, is mistaken for a man by the male lead, Choi Han-gyeol, played by the actor Gong Yoo.
Despite his confusion, Choi decides to accept his affection for Goh, even while he still believes she is a man.
Sounds familiar? Many say the plot is similar to William Shakespeare’s comedy, “Twelfth Night.”
The show’s success is thought to flow from several factors. One is the popularity of gay romances in comic books enjoyed by young women in their teens and 20s. The show’s delicate exploration of emotions and relationships has also helped to addict viewers, even though it explores different aspects of gay relationships, which were considered a huge taboo in the past.
Television dramas or films with gay themes appeal to women more than men, according to findings by Realmeter, a public survey company. Their study, conducted among 500 people aged over 19, found 20 percent enjoyed watching television shows featuring gay relationships, but 50 percent said they try to avoid such shows because they find portrayals of gay couples make them feel uncomfortable.
When divided by sex, only 15.9 percent of male respondents were favorable to such shows, whereas women accounted for 24.9 percent. Among those in their 20s, 23.8 percent enjoyed shows portraying gay relationships. Those in their 30s produced a 22.7 percent favorable rating. Among those in their 40s or 50s, the figures were 20.7 percent and 15.5 percent, respectively.
However, from the perspective of Coffee Prince, the most important rating is their big share of the prime time audience.