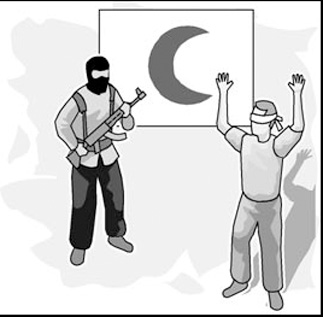 Two famous French breads are the baguette and the croissant, the latter of which is popular at breakfast. A day in Paris usually starts with the eating of a croissant and a hot cafe au lait. In Korea, where flat breads used to be the only culinary pleasure, croissants were introduced to our tables following the 1988 Olympics.
The word croissant in French means crescent, which is how the bread is shaped. Stories differ about how the bread was created, but there is one common factor. It originated from the war in the late 17th century between the Christian powers in Europe and the Muslim powers in the Middle East, or more broadly, the cultural and religious conflicts between the two camps. The croissant is deeply related to the symbol of Islam, the crescent.
One theory is that the croissant was invented in Vienna. In the 1680s, Vienna, the capital city of Austria, then the Habsburg Dynasty, had been besieged for two months by the Ottoman Empire army of 140,000 men. Citizens of Vienna, desperate because supplies had been stopped due to the siege, were said to have made and eaten crescent-shaped bread to reinforce their determination to win. Another theory is that the king of Poland, who was a tremendous help in the defeat of the Turkish army in the Battle of Vienna, suggested making crescent-shaped bread to chew the symbol of the enemy. And as Marie Antoinette, the princess of Austria, married Louise XVI, then crown prince of France, the croissant crossed the border into France.
The Red Crescent, which played a critical role in the release of two female Korean hostages in Afghanistan, literally means a red crescent, the symbol of Islam. It is the parallel organization to the Red Cross, which has played a critical role in humanitarian missions in numerous wars and catastrophes. The Red Crescent, however, uses the crescent that represents the religion and identity of Muslims, instead of the cross, the symbol of Christianity. Many Muslim countries, such as Turkey and Malaysia, have a crescent on their national flags.
It is the same shape, but many are not aware of the Red Crescent, although they know croissants. Nonetheless, the Red Crescent is an internationally recognized organization founded in 1929 which has conducted volunteer work in 33 countries under its flag. We may have been too engrossed with the hostile image of Islam, such as, “A sword in one hand and the Koran in the other,” Al-Qaeda and the Taliban. We’d better be careful to see whether we have taken an unbalanced approach to Islam, or whether our prejudice has withered even our intellectual interest in understanding Muslims correctly.