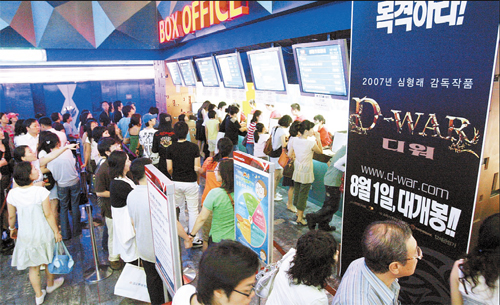 Scathing reviews haven’t kept crowds like this away from “D-War.” The Korean-made sci-fi thriller is the most popular movie of the year so far, having sold 6.13 million tickets as of yesterday. By Kim Hyung-sou

Eleven-year-old Lee Seong-gwon said he felt extremely proud of his country after watching “D-War,” the film that has taken Korea by storm, with 6.13 million tickets sold as of yesterday, making it the most successful movie of 2007.
D-War is a fantasy film with a heavy dose of computer graphics.
Despite vitriolic reviews, the film sold its first 6 million tickets within two weeks, making its sales the second fastest in Korean history. It is already among the top-10 Korean box office hits of all time.
Next month, on Sep. 14, D-War will open in the United States on 1,500 screens, the widest release ever for a Korean film.
“I am so proud that this film is Korean-made and based on a Korean legend,” Lee said, after a screening at a Seoul theater on Monday.
In common with millions of other Koreans who have made D-War a hit, despite an avalanche of critical condemnation, Lee’s favorite part came toward the end when a message from director Shim Hyung-rae appears which says, “D-War and I will succeed in the world market without fail.” This moment is accompanied by “Arirang,” a Korean folk song.
In a bid to capture a big slice of the U.S. market, D-War has American actors and was filmed in English. “From the very beginning, the film was aimed at the global market,” said Choi Geun-ha of Showbox, the film’s Korean distributor.
The film’s Korean label is kept in place by American actors like Jason Behr who cite Korean proverbs and drop Korean words like “imugi,” a legendary serpent.
D-War is based on a Korean legend about serpents who fight for the chance to become celestial dragons.
In the film, a girl is born every 500 years with the power to transform serpents.
She first appears during the Joseon Dynasty and then reappears in modern-day Los Angeles. Pandemonium ensues as an evil serpent tries to catch the girl.
Many critics who disliked the film cited its heavy-handed attempts to manipulate Korean patriotism.
“Many Koreans are going to see the film because its computer graphics were made in Korea,” said film critic Kim Bong-seok. “They want it to be successful in the U.S. because it’s Korean, not because its good.”
The film’s reliance on patriotism, rather than the quality of its script or actors, has boosted D-War’s success at home, Kim says.
“When something wears a patriotic label, Koreans tend to give it unconditional support en masse,” he said. “That’s exactly what’s been happening with D-War.”
As a film, Kim rates D-War as “immature and poorly made,” although the film’s computer graphics “deserve some attention.” Chin Jung-kwon, a culture critic, is more vocal. He says the film’s storyline is “a total fiasco” and its structure is “preposterous” as is its way of “selling nationalistic ideas.” “The film does not even have the ABCs of storytelling,” he says. “There is not even a hint of logic for viewers to follow. It’s really just an avant-garde B-movie. We saw better [computer graphics] in Steven Spielberg’s ‘Jurassic Park’ 10 years ago.”
Chin says he is repulsed by the film’s success and its reliance on patriotism to sell tickets.
“Patriotism and nationalism are sure-fire elements with Koreans, which is a remnant of past military regimes when nationalism bound people together,” Chin thunders. “Koreans see it as some kind of national honor that the film is going to the U.S. market with home made technology.”
He pointed out that the film’s promotion put emphasis on the fact it was going to be seen in the U.S at the time of its release in Korea.
In this regard, Kim says that D-War is more than just another movie.
“It is developing into a social phenomenon which everyone is eager to be part of,” Kim says. “When this happens, because of our national psychology, Koreans have an urge not to be isolated from it.”
For this reason Kim thinks the film will continue to be a box office success, perhaps reaching 10 million ticket sales within the next 10 days.
The part that made Kim and many other critics feel most ill at ease is the director’s message at the end of the film.
Shim, a comedian-turned-director who specializes in films with computer graphics writes, “I am now challenging myself to be the best. I never gave up. I always believed that I would make it. I am counting the days until D-War amazes the world.” 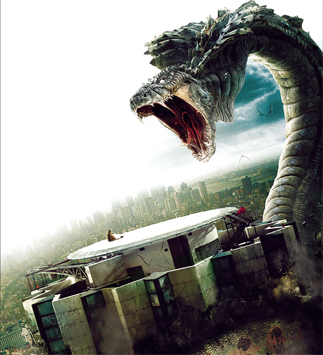 A scene from “D-War.” Provided by Showbox

The background to the speech is a series of stills which begins with Shim in a director’s seat and ends with him standing in front of the Hollywood sign in Los Angeles.
“A director should speak through his films, not with strange lectures that do not even fit into the grammar of filmmaking,” Kim says.
Choi at Showbox defends Shim’s D-War postscript. “We wanted to let the audience know how hard and passionately the director has worked in his devotion to this film,” she said. “We hoped to give Korean viewers a sense of pride in being Korean.”
Choi denied that the film’s marketing put too much reliance on patriotism. “We just wanted to share the meaning of the film with the viewers,” she said.
The U.S. release will not include Shim’s speech, although “Arirang” survives. “We wanted to let the world know that Korea has this beautiful song,” Choi explains.
Shim used to be a slapstick comedian. His transformation to an internationally renowned film director has been almost as difficult as turning snakes into dragons.
The critics accept that the director wants some credit for confounding those who said he would fail.
“Of course, Shim deserves credit for his career, but it makes no sense if he positions himself among the best directors as a heroic figure,” says Kim.
As a popular slapstick comedian in the ’80s Shim used to play a fool named Young-gu and starred in sci-fi films for children. He then set up Younggu Art, where he created his first sci-fi film, “2001 Yonggary.”
Showbox says that many of D-War’s fans are in their 30s and 40s and are buying tickets out of nostalgia for the director’s days as a comedian.
Shin Youn-joo, an official at Maxmovie, a major online ticketing company, said that 41.4 percent of people who bought D-War tickets from its opening to last Sunday were in their 30s and 23.4 percent were in their 40s; 30.9 percent were in the 20s and 4.3 percent were teens; 53 percent were men and 47 percent women.
Kim Kyoung-wook, another film critic, says many fans of the film went to see it because they were angry with the critics. The controversy intensified after last Friday’s “100-Minute Debate” on MBC-TV, when Chin showered the film in vitriol. After the show, Chin became a target of online criticism by D-War enthusiasts.
“I don’t care what the critics say,” said a 22-year-old man who saw the film this week. “The film was entertaining. Isn’t that enough?”
An online fan club for Shim and D-War now has over 63,000 members, with a hierarchy and regional branches. Many of the club’s postings are condemnations of the critics.
“Moviegoers are using the D-War phenomenon as an opportunity to hit back at critics who tend to advocate auteur films and despise commercially successful movies.” she says. “The film drew new battle-lines between critics and the public.”
“People are watching the film because it’s fun,” Choi says. She cited a recent Maxmovie survey that found 59 percent of ticket buyers said they saw the film “to enjoy free time during their summer vacation.” In the survey 8.3 percent said they watched the film out of curiosity because of the controversy and 7.7 percent said they saw the film “because it is going to the United States.”
Some critics like D-War. Min Bae, a professor of film production at Canada’s University of Windsor is one of them. “The film was not perfect, but it was faithful to its genre,” Min says. He notes that the movie offers “good entertainment” for viewers. “Shim is making progress, and the critics need to give him some time.”
Shim, who has shunned the media since the D-War controversy began, is now en route to the United States for the American premiere of his film.
Min is cautious about D-War’s U.S. prospects, given that it opens in September, when the fall semester starts and young viewers have less time for movies.
Critics like Chin, meanwhile, show no sign of backing down. Regarding the U.S. release, Chin says, “One thing for sure is that the film will not get rave reviews from American critics either.”