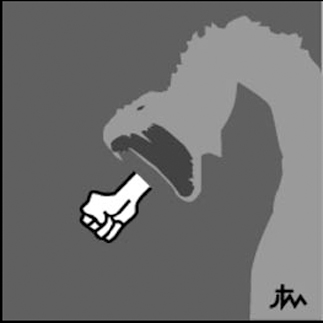 In Korean, saying someone “wears ya-hage” is not a compliment.
Ya-hage, or in its present stem ya-hada, means being sassy or tawdry. The origin of the word ya goes back to the term health, which implies the uncultivated nature of wild health, far distanced from the culture of the city.
As time goes by, however, ya-hada has come to mean being gaudy and flippant. Therefore, to use that term means a person’s fashion is unbearably vulgar.
If you add “bi,” which refers to an impoverished, far-removed place, to the word ya-hada, then the new word yabi-hada has the meaning of being very brutal.
Yabi-hada refers to incomparably vulgar and savage talk or the character of such a person. If you carelessly say yabi-hada to anyone, you should expect to receive a lot of swear words in return.
But the tyranny of abusive words sweeping Korean society seems to nearly be yabi-hada.
There are circumstances that can only be described by the term yabi-hada, with all the risks of getting sworn at.
The debate over the film “D-War” and its director, Shim Hyung-rae, resembles an abusive verbal fight.
Before analyzing the rights and wrongs of each side’s reasoning, both sides exchanged arguments that almost seemed violent, especially through the Internet, and what matters now is not the debate, but a cheap fight imbued with emotional abuse.
Each side seems to believe they can score points only when attacking the other and by using even more impertinent words for the same meaning.
The debate then becomes a verbal fight instead of a constructive discussion, because the words of each party in the debate remain abusive and vulgar. Presumably, each side wants to stand out by using ever-more abusive language. This is not simply about the D-War discussion.
It is not a recent matter that, in general, the words used in Korean society have gotten more vulgar and aggressive.
Two examples of the problem instantly stand out.
President Roh has always stood in the media limelight because of his reckless talk. In addition, both camps of the presidential hopefuls of the Grand National Party follow the typical model of using verbal violence.
One’s speech reflects one’s quality. We should sincerely think, as a society, why we cannot get rid of the habitual verbal abuses that are close to being yabi-hada.