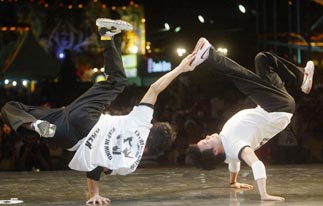 Extreme Crew, a young break-dancing team, performs in Busan on Aug. 4 at the Asian regional preliminary competition of Battle of the Year, the major international B-boy contest. [NEWSIS]

Branding is critical for tourism. We live in an era in which tourism is both an industry and a product. Having a good image is essential to promoting a country and attracting foreign tourists.
Recent years have indeed witnessed a flurry of Asian countries rushing to brand themselves as tourist destinations. Hong Kong launched a breezy “Live It, Love It” campaign that emphasizes the city’s energetic atmosphere and commercial flair. Perennial tourist favorite Thailand is building on its welcoming reputation through its “Happiness on Earth” campaign, while Malaysia has gained special praise for its highly successful “Truly Asia” campaign, which casts the country as a place to experience all of Asia at once.
Singapore launched “Uniquely Singapore” to reflect the intrinsic and unique aspects of the city-state. Such promotional efforts have generated huge returns. Last year, 25 million tourists poured into Hong Kong; Malaysia hosted 18 million and Singapore attracted 10 million.
In July, Korea unveiled “Korea, Sparkling,” its first official campaign to brand itself as a viable tourist destination.
While “Dynamic Korea” will retain its role as the “national” brand, “Korea, Sparkling” as its sub-brand will exclusively focus on promoting Korean tourism to foreigners. It intends to convey a sense of the vitality and energy of Korea’s people and culture.
However, simply launching promotional campaigns without competitive tourist content is bound to fail. Korea needs to develop new content tailored to the “Korea, Sparkling” brand. Although there are widely held perceptions that Korea lacks tourism resources, the country can still develop outstanding tourism content by applying new, creative, even “sparkling” ideas to existing resources.
Many are already working on this. Examples include the temple stay programs that allow foreigners to experience Buddhist culture and study meditation, as well as the family house experience in Andong that allows visitors to access to traditional houses where families have lived for generations.
Other regions and municipalities are experimenting with creative new ways to attract tourists. Gyeongju’s “Flower Village” Herbal Medicine Clinic is encouraging “medical tourism,” providing visitors access to both Western and Oriental treatments.
One herb farm in Cheongwon, North Chung-cheong has developed a unique herb-flower rice, and attracts two million foreign tourists annually. Nami Island in Gyeonggi was once a shabby third-rate amusement park, but has been reborn into a must-see cultural tourist venue by taking advantage of the Korean wave, or hallyu, and adding creative ideas to it.
Meanwhile, tour programs based on sports are gaining popularity among young foreign tourists. For example, Korea’s “Fun Ski” program targeting tropical Southeast Asian nations draws more than 600,000 visitors every winter.
Performing arts are becoming Korea’s most internationally popular art form.
“Nanta,” a non-verbal musical performance that combines traditional Korean samulnori rhythms with choreographed routines has become one of the most popular attractions for foreigners.
B-boy shows that show off Korea’s most talented young break-dancers are poised to be the next top tourism attraction. International sports events like the 2014 Asian Games in Incheon and the 2011 Track & Field Championships in Daegu will also be excellent opportunities to introduce the country as a tourist destination. Furthermore, the government has started to develop tourism complexes in earnest on the southwestern coast and Jeju Island.
Despite these attractions, Korean tourism has a long way to go. Last year, 11.61 million Koreans traveled abroad but only 6.15 million foreigners visited Korea. Korea’s “travel account deficit” amounted to $8.49 billion.
Simply put, the Korean tourist industry is not very competitive. The nation’s travel products and services are perceived as having only low to middle value on the international market, while higher price levels make them unattractive compared to their competitors. Travel information in foreign languages is often sparse or altogether unavailable, and venues for sightseeing are both limited and overpriced. Given these circumstances, the lack of foreign visitors should come as no surprise.
There is substantial competition from China, which boasts significant attractions, as well as Japan and Taiwan with their high-end tourist services. In response, Korea needs a shift in thinking to fully develop its tourist trade. Tourism is an industry, and its performance depends on what kind of “software” (ideas, events, tourism packages, systems and services) one adds to the same “hardware” (existing resources and facilities such as tourist complexes, leisure parks and hotels).
If Korea creates “sparkling” tourism products, it will become a viable tourist destination. The future of Korea’s tourism will depend on “software competitiveness,” which means applying creativity and inventiveness to develop compelling tourist content. Only then will tourism in Korea have any chance of sparkling.

*The writer is research fellow at Samsung Economic Research Institute. Inquiries on this article should be addressed to eco.kang@samsung.com.