A town built on style and artistic harmony

A town built on style and artistic harmony 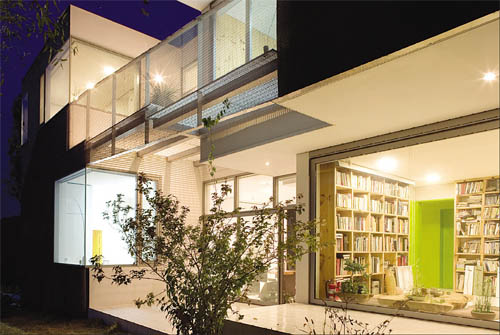 The guesthouse Motif#1 By Kim Yong-gwan

PAJU ― There’s a tranquil narcissism to be enjoyed when strolling through the stacks of books at Heyri’s Book House.
Just by stepping inside the house it feels like one is bound to be on the next cover of “Wallpaper” magazine as some modern sophisticate cherishing a moment from “La dolce Vita.”
In fact, Heyri has everything a young Korean needs to experience posh urban life, including taste, intelligence and shopping.
Heyri Art Valley sits on the northern outskirts of Seoul and consists of museums, concert halls, bookshops and cafes housed in buildings that are so original they have become a mecca for local architecture students.
Heyri began its existence in 1994 when a group of artists, writers, publishers and film directors decided to turn a vast stretch of rice paddies alongside the barbed-wire fences of the North Korean border into a cultural fantasia.
In less than a decade, Heyri, named after a local farmer’s song, was transformed into a cultural Disneyland for noted celebrities, and village residents must belong to a union consisting of people who work in the creative industry.
Architecturally, Heyri has established a reputation as a futuristic town, with its avant-garde designs by some of the country’s most important architects. The town’s Web site indicates the architect’s name alongside listings of its shops and museums.
Heyri’s artists have developed subtle ways to mix art and business.
Bookshops in the area, which is modeled on Hay-on-Wye, a town on the border between England and Wales that is famous for its bookstores and literary festival, are a typical example.
At Heyri’s Book House, I usually spend hours browsing through collections of literature, travelogues and coffee table books, failing to realize until I’m at the checkout that I was actually looking for a good excuse to spend some money.
I once bought “The Pocket Book of 20th Century Photography” here. A collection of works by the century’s leading photographers including James Nachtwey, Robert Kappa and Eugene Atget, it cost only 14,000 won ($15.50), a gratifying price considering its quality and quantity of photographs. 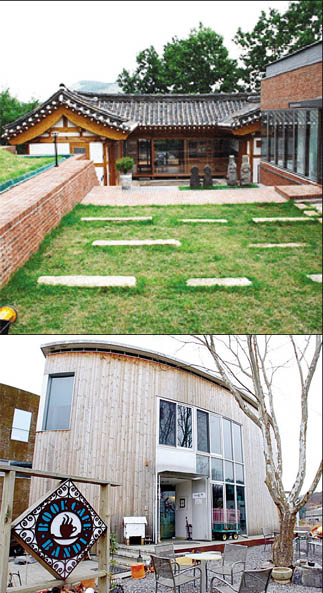 Above: a hanok guesthouse at the 93 Museum. Bottom: Book Cafe Bandi. Bottom center and right: The BookHouse, a bookstore that includes the William Morris Gallery Provided by the organizers

The shop usually has a vast collection of art and design books with excellent photos, which Hangilsa, the publisher that owns the shop, is known for. It houses a complete volume of Taschen’s “Icons” Series in Korean and a separate section of books on Korea in English.
But Heyri is more style-conscious than Hay-on-Wye, at least when it comes to visual presentation.
The Book House has the airy feel of a yuppie hangout south of the river with its high ceiling, floor to ceiling glass windows and spacious lobby.
The shelved books along the spiral walkway lead to the top of the building and seem like an illustrated highway for an art pilgrim. Overall, the books are shelved so sensually that, from afar, the stacks of colorful spines look like an art installation.
There are several other bookshops and reading rooms at Heyri, including Magazine House, Artinus and Book Cafe Bandi. But, for most people, everything begins at Book House, mainly because the architecture of the building is so striking ― it looks like the wooden keys of a grand piano before they are coated with paint ― and it is located in the village center on an elegantly curved street.
In the gallery downstairs, there are currently two exhibits on display. One is “I Love Party,” a collection of furniture designed by SiSi Kim. The second is drawings by Park Hun-gyu about a trip from London to Dublin.
Both shows reflect on travel and everyday life, themes that are often explored in Heyri. However, on occasion, the galleries offer edgier shows like the Japanese Contemporary Art Festival which ended last month.
A tour around Heyri can be done on foot and the town’s grass walkways are intended to mimic a country road, compensating for the concrete slabs of the modernist buildings in the village.
Passing hills, streams and footbridges, there are galleries, museums and music halls.
For the past two years, many galleries in Seoul packed their bags to set up new branches in the area and benefit from the cheaper rents. Ssamzie has a giant warehouse here where it keeps its major collections of contemporary art on permanent display. Others like Geumsan have also set up here.
Artists who specialize in ceramics, quilts, jewelry and architecture, have also settled in Heyri, often with cafes or restaurants on the main floor to keep their other business going.
And there are collectors’ museums. The Cine Palace has movie posters, animation characters and collectibles; Agora specializes in political philately; Woongyeongjae has African crafts and Asian antiques.
For music there is Camerata, a listening room which houses over 10,000 LPs with an electric speaker system that was once used in movie theaters in the 1930s. The system is supplemented with BE Research’s 300 B amplifiers. There is an entrance fee of 10,000 won, which includes espresso or Korean teas.
Heyri also has some charming guesthouses, which tempt Seoulites to stay overnight, even though the trip back to town is short.
Motif #1 (031) 949-1901, where I spent my summer vacation last year, has a spacious reading room facing a front yard. Last summer, I stayed awake until 3 a.m. on a balcony in a beach chair reading and listening to the crickets ― it was bliss.
The facilities are relatively simple. It has three rooms ― white, blue and black. The two smaller rooms cost 120,000 won a night (140,000 won on weekends and high season). The larger one is 220,000 won for four (260,000 at weekends) and it comes with a kitchen and balcony. 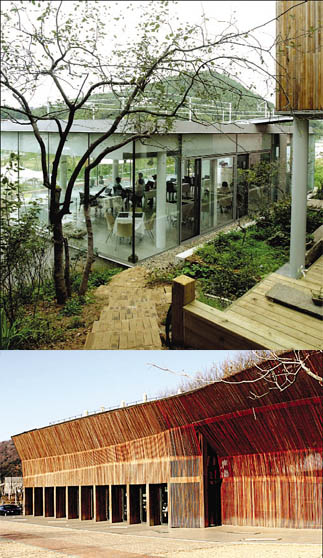 93 museum (031) 948-6669 has a deluxe hanok guesthouse, which rivals the standards of a five-star hotel. To rent the whole house the museum charges 300,000 won (350,000 won on weekends), complete with a kitchen, dining room and bathroom. Unfortunately cooking is not allowed because of fire precautions. But the museum offers a meal coupon that gives discounts on all the restaurants in the area.
In the end, there is no better way to shop without guilt than to combine it with art and culture.

To get to Heyri Art Valley take a No. 200 bus from Hapjeong Station. It stops at Heyri and Paju English Village.
By car take Jayuro and pass Isanpo IC. Take Seongdong IC as soon as you pass the Unification Observatory. There you will see Gates 1 and 4. There are many restaurants in the vicinity. Most offer pasta, sandwiches and steaks. If you want a humble Korean meal, there are plenty of country-style restaurants just outside Heyri’s gates.
For more information about Heyri, call (031) 946-8551.

“Art Story in Documentary Film”
To Sept. 2
Artspace Camerata, (031) 957-3369 will screen a selection of 20 documentaries about artists and musicians from the 4th EBS International Documentary film festival, including biographies of Beethoven and Mozart.

“Transparency”
To Sept. 2
Gallery MOA, (031) 949-3271 features artworks by Park Byung-hoon, who has been working in Paris on the subject of “transparency” for 40 years. The artist uses transparencies as “mirrors that reflect the outside world as seen through a certain material.” At MOA, visitors can also buy books with photos of Heyri’s architecture.

“The Sixth Sense Photography Expedition”
To Aug. 30
UV house, (031) 947-5958 features the work of 15 female photographers from the Korean Women Photographer’s Association. The artworks focus on notions of instinct, harmony, emotion and the unconscious from a Jungian perspective.

“This is Dokkebi Land”
To Oct. 14
Neverland Picturebook Museum, (031) 948-6685, features illustrations and statues of goblins as they appear in traditional folktales.

“I Like Parties ― Sisi Kim’s Other Design Exhibition”
To Aug. 26
Gallery William Morris presents Sisi Kim, a veteran artist with more than 20 years experience, who returned to Korea six years ago after being featured in more than 20 exhibitions in Japan. This exhibition’s theme is “relaxation,” and it features tables, chairs and other everyday objects.

“I Don’t Want to Go Home”
To Dec. 31
I like Dalgi, (02) 422-8111) presents a show of children’s books, divided into two themes, “I Like Mountains” and “I Like the Sea.” Children can climb trees made by artists, ride model submarines and experience waves.

“Vietnamese Modern Art Exhibition”
To Aug. 31
93 Museum, (031) 948-6677, features works by contemporary Vietnamese artists. The French occupation had a big influence on local traditions and art, which is explored in this exhibition. Visitors can also see a series of prints by Lee Dae-won.