Art takes a rapid highway to faster forms of expression

Art takes a rapid highway to faster forms of expression 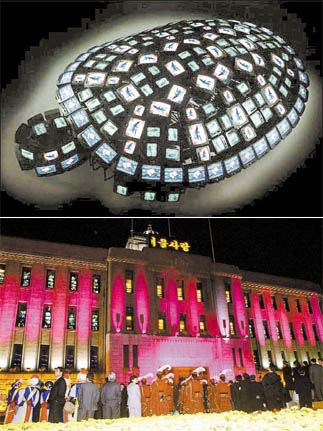 Above: Paik Nam-june’s “Turtle” Below: Work from Media City Seoul artists projected on the facade of Seoul City Hall Provided by the organizers

When video artist Park Yong-seok began interviewing people about their personal memories of doves and pigeons ― these birds share the same name in Korean ― he discovered something interesting.
Among the people he met, he found two strangers who both had the same memory of doves flying during the opening ceremony of the 1986 Asian Games. Interestingly enough both also felt similar feelings of loneliness when they saw doves during their time spent studying overseas.
Park went back to his studio and edited the two women’s stories as if they were engaged in a dialogue. He used the doves as a metaphor for urban gypsies, and titled his video installation “Dove.”
“The memory of doves is a memory of the city, because doves are symbolic of the city,” he says.
Park belongs to a generation of young media artists in Korea who examine urban issues through new technologies.
His concerns, both formal and conceptual, are deeply embedded in a techno-media aesthetic that is common among contemporary Korean artists and is influenced by Paik Nam-june, the father of Korean video art.
To commemorate the first anniversary of Paik’s death, there are a number of major retrospectives and exhibits featuring young Korean artists, including “Video Symphony,” a giant show of Paik’s works now underway at the KBS Hall.
Paik’s influence on Korea’s contemporary art scene is huge. He opened doors for the video art genre wherever he went.
Amy Taubin, an art critic and former curator of Video and Film at the Kitchen, an important alternative media center in New York, summarized Paik’s achievements during a recent e-mail interview.
“When Nam-june bought his first Sony Portapak in the mid-1960s, no one else except Andy Warhol had used video technology outside the television industry,” she wrote. “Paik Nam-june made wonderful video installations that bridged the boundaries between high art and popular culture, between East and West, and between modernism and post-modernism. He was a true visionary and a great showman,”
Korea’s information technology industry has been an important element in the country’s emergence as a global economic power. Hence, the Korean government has been eager to encourage video and other forms of digital art. 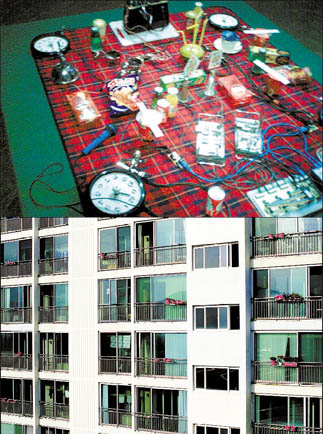 Above: “The Telematic Dinner Party” by Michelle Teran and Jeff Man

The Media Biennale, organized and hosted by Seoul city government since 2000, emphasizes video art, as does the Gwangju Biennale. Choi Doo-eun, a curator at Art Center Nabi, which specializes in media art, says that many young artists have chosen media art, encouraged by the government’s support of the genre.
“Large media art exhibitions hosted by the Korean government are designed to boost the local IT industry,” she says. “The audience here, in what is a highly developed IT country, are very familiar with media art. We access media art more frequently than we do traditional paintings or sculpture. Koreans really enjoy the interactive experiences provided by new media.”
Park, formerly a painter, began working in video art seven years ago because he wanted to pursue narrative techniques in his work, which he finds is easier in this genre. Park believes that video art is the most suitable medium to express his feelings about urban space.
“In my case video was a tool,” he says. “It allows me room for experimentation. I am into space, especially cities. To understand who we are, it is essential to understand the space we inhabit. Our identity is defined by where we live.”
In another work, Park documented a process in which he took disused plant pots and painted them pink before distributing them to random tenants at an apartment building with a request that they keep the pots on their terraces.
In “Sun and Moon,” Park overlapped different versions of traditional folktales told by his acquaintances with footage shot in Bukchon, an area designated for the preservation of traditional houses by the local government . He was exploring how memories and urban spaces are maintained and distorted.
“I found that traditional legends are remembered very personally,” he says. “One person will see a horror story, another a comedy. The legend is being recreated every moment, just like our lives.”
As this type of art attracts more attention, new educational institutions have opened up to teach the medium. 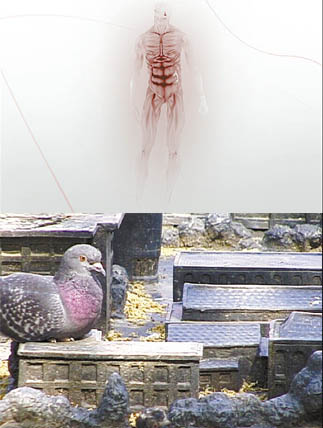 Above: An image from Shin Eun-chul’s “Broken Body” , An Image from “Dove” by Park Yong-seok Provided by the organizers

The Graduate School of Communication and Arts at Yonsei University, which provides a series of hands-on classes in media art, is one of them.
Shin Eu-cheol, a graduate student in the program, focuses on technical elements of advanced media. He creates delicate movements of the human body and plants using 2-D or 3-D techniques.
“I think Paik Nam-june had advanced knowledge of media technology even in the 1960s,” he says. “His technical experiments inspire me to develop more sophisticated techniques of media art.”
As mediums of advanced technology have shifted over the past few decades from mass media like TV and radio to more interactive forms such as the Internet, the spectrum of media art has also become more diverse, evolving from the plain screens of video art to create images for the Web, video games and mobile digital technology. And the possibilities in the future are unlimited, as personal communication devices offer more scope for creativity and interactivity.
“While Paik Nam-june criticized mass media’s style of one-way communication through his video works, recent media artists have focused more on individualized experiences with the new media, now that media have became more personalized,” Choi says. “That is a big change.”
Seo Hyeon-seok, a professor and video artist at Yonsei, explains that Paik’s most important legacy is the rebellious attitude he showed toward mainstream art of his time.
“His works mean more than style,” he says. “After Paik Nam-june, young Korean artists have become more confident and bold in their artistic experiments. Even painters or theater artists incorporate technology in their work today. This trend encourages young artists to learn new computer languages, which were once considered part of an engineer’s job.”
As a result of the legacy which Paik left to contemporary art, more and more Korean artists are experimenting with the new media.
“I think Paik Nam-june opened the wonderland called media art,” says Yang Yeon-jin, an art student at the School of Visual Art in New York. “Nobody knows for sure what will happen in the future of media art, because the medium has endless possibilities.”