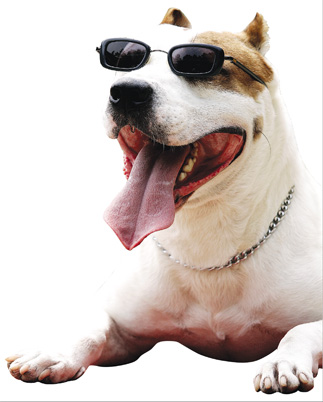 Until last month, Ssambo, better known as Jeombak-e, was working like, well, like a dog.
Starring in the SBS TV soap opera “War of Money” as the main character’s friend, he spent every day absorbed in doggie acting. Here’s a typical workday for a dog actor:
On the day of his shooting, Ssambo wakes at 8 in the morning and works out by running around a field for 20 minutes.
Breakfast is served by his trainer and after the meal, he received a shower to keep neat and tidy.
After getting his “makeup” on, Ssambo’s trainer places him in a replica of his set for the day for example, if the scene involves going down a slide on the playground, he practices on a similar slide.
This kind of rehearsal makes the dog more comfortable during the actual shoot.
When arriving at the filming area, Ssambo and his trainer warm up by walking around the unfamiliar area to become comfortable with other actors.
Finally, when the director gives the signal, Ssambo begins acting with his eyes.
“Dogs have emotions, too,” claims Cho Sung-jin, the pet’s owner and head of the Korean Dog Training School in Bundang, Gyeonggi.
“They smile by snuffling their nose, lifting their lips or moving their ears,” Cho said. “Some express themselves by wagging their tail or lying down.”
Ssambo is a three-year-old American Pit Bull Terrier, and he is a pet star in Korea.
He played an important role in “War of Money” by consoling the main character, as his best friend. Viewers were moved by his performance and he gained stardom, reaching No. 1 as the most frequently searched name in Naver, one of Korea’s largest Internet portal sites.
Though Pitbulls have a reputation as aggressive fighting dogs, Ssambo is different.
“He is well-trained,” said Cho.
At first, directors and producers disagreed about casting Ssambo as a star in the soap. They were afraid of the fearsome Pitbull image. Plus, Ssambo in Korean means fighter.
Instead, the staff recommended a noorung-e, a yellow dog, for the drama. But Cho recommended Ssambo because unlike other pitbulls, he was trained to love people. Cho argued that Ssambo was outstanding at expressing different emotions. He convinced the directors that a boxer is trained to punch only when he is inside the ring the same is true with a trained pitbull, Cho said.
“Animals have a higher emotional quotient than people,” claims Cho. He said dogs have 50 to 100 times more emotional appeal compared to people, which is why pets are often used to sell products.
Ssambo isn’t the first pet star to grab public attention in Korea. The first to appear was a Pug in a 1991 World Cone ice cream commercial. The Pug starred with Shim Hyung-rae, then a well-known comedian and now director of the current movie sensation “D-War.”
Following the Pug was a Collie named Max who appeared in a Vatel wireless phone ad. The scene involved Max delivering a ringing phone from the kitchen to the living room, where the family sat. The commercial was a big hit and the local ad industry became led by the 3Bs ― beauty, babies and beasts.
But long before the appearance of Max, the Western media had already brought pets to stardom.
Lassie, a Collie, and Benji, a mutt, are legendary names in pet star history. Through two films, “Lassie Come Home” (1943) and “Benji” (1974), people recognized dogs as part of the family and not as farm animals.
“Lassie” filmed 691 TV episodes and the show aired in more than 100 countries. More than a billion people worldwide have watched Benji on TV, according to Mulberry Square Productions.
After that success, pet star agents were established in Hollywood. 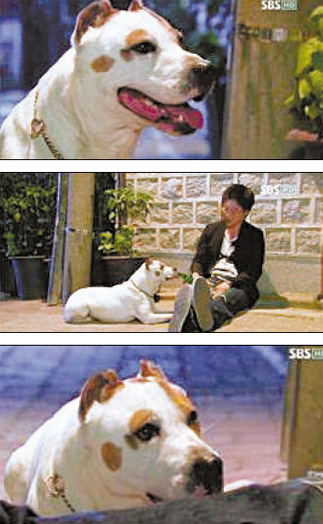 Ssambo in scenes from the TV soap drama “War of Money” with actor Park Shin-yang, center. Provided by the organizers

“But in Korea, it’s a different story,” said Cho. He said no agencies here represent acting pets unlike Western countries.
This is why Yoon Byeong-yong, creative director of Daewoo Prugio Apartments, picked a Western model for the product’s recent commercial. Without an agency, pets lack support in training, Yoon said.
The company prefered a Hollywood pet star that is more proficient in acting. The 10-year-old White Terrier Bambam, who previously appeared in the movie “Cats and Dogs,” was selected.
“We tested local pets but they lacked experience compared to other Hollywood stars,” said Yoon. He said local pets were afraid of camera lights, whereas the Hollywood animals are able to adjust to them.
Bambam received a “script” two weeks before her arrival in Korea. She arrived with two professional handlers. On the day of the shoot, two other local white terriers of similar appearance were on standby in case Bambam got sick or tired.
“On shooting day, Bambam understood everything the handlers said and showed excellent acting skills,” said Yoon. “There hardly were any NGs [no-goes].” The actual filming took only three hours, thanks to Bambam’s performance.
The company paid Bambam’s agency 30 million won ($32,250) for the work.
Ssambo received 1.5 million won a day for the drama shooting, on condition that filming did not exceed 12 hours a day.
Sseulja, a two-year-old English Sheepdog now appearing in “Coffee Prince Branch No. 1,” a popular TV soap drama with an audience rating of 30 percent, also receives around 1 million won for a day’s work.
Choi Seung-yeol, the owner, is satisfied with the payment. He bought Sseulja for around 8 million won and 2 million won was spent on training. He said that 10 days of shooting would cover his expenses.
Many soap drama fans love Sseulja because she acts as a cupid between two main characters.
Another popular pet actor is a four-year-old Collie named Moongchi who stars in a SBS drama, “Oh! Su-jung.” She also plays an important character by reflecting the main character’s feelings and thoughts.
During Cho’s 20-year career, he has trained around 100 animal actors. He said directors hand over the script just one day before the shooting.
“They don’t give enough thoughtful consideration,” said Cho.
“Dogs aren't human - they need more time to practice,” said Cho. “Also, more consideration should be given since pets get tired more easily.”
He compared the shooting environment to that of a recently released Western film, “Evan Almighty,” a sequel to the 2003 film “Bruce Almighty,” loosely based on the story of Noah and his Ark. Cho read an interview with director Tom Shadyac that said 350 animals of 170 different species appeared in the film. The welfare of the animals was given priority above everything else.
According to Movie and I, the movie promotion company, a 64-page guidebook was written by the Evan Almighty staff to protect animals from overwork and to provide them with the best environment.
The guidebook says pets should spend time with actors before the shoot and that the trainer should always be with them. Pets should not be on set for more than eight hours. Animals that have appeared in the movie got health checkups once a week and were supervised by professional trainers.
“There is no such guidebook in Korea,” said Cho.
“There are no pet agencies or organizations to protect pet rights. With an increase of pet stars in Korea, it’s about time we officially establish pet agencies.”