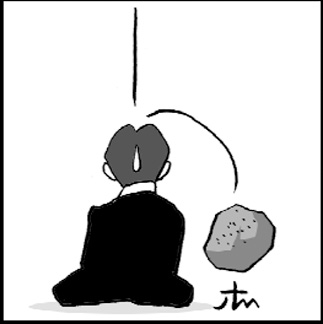 “Dullness ― this is the pure motive power that enables us to bring out talent and bear fruit.”
This praise for dullness comes from a bestseller in Japan called “Dullness.” The book has already sold over a million copies. Dullness is a candidate for the buzzword of the year, which is awarded in December.
The word “dull” has a negative connotation implying either dull senses or personality. However, according to Watanabe Junichi, the author of the book and a doctor, it is better for a person to be dull than sensitive.
People who are able to forget being scolded by their bosses or having something bad happen to them or people who eat and sleep well no matter what happens to them are characterized by dullness.
Victims of bullying are dull. Even if they uncover a huge fault in a fiance, they just get over it as if nothing happened. A mother’s dullness is the highest of all. She inspects her child’s excrement to see how bad it smells and looks carefully at its color.
I agree with the author that a person who can endure trivial unpleasantries through dullness are able to succeed in their field. It is an art of living one should learn.
Former Prime Minister Junichiro Koizumi advised Shinzo Abe twice not to worry about his declining approval rating. He must have been touched after reading the book “Dullness.” Shinzo Abe answered by saying, “Yes, we might need that dullness.”
To be frank, these two are a great “dull combination.” Although Abe recorded a historical defeat in the Upper House election results last month, he keeps repeating, “We should examine what is wrong and complete reforms under my cabinet.”
How noisy the nation is. He does not say what he will be examining and what reforms he is planning. He is providing irrelevant answers when asked to take responsibility. In addition, he plans to visit India this week to talk with the surviving family of an Indian judge who argued that class A war criminals were innocent.
As for Koizumi, who is a master of dullness, he visited Yasukuni Shrine on the morning of Aug. 15th as soon as the doors were opened. He must not realize how much his visit to the Yasukuni Shrine messed up his diplomatic relations while he was in office.
What the author writes about is finding a balance between a good sense of dullness and common sense. These two must have forgotten this or are trying to neglect it. Anyway, maybe I lack dullness since I cannot just let two people who are so historically dull fade away from my mind.