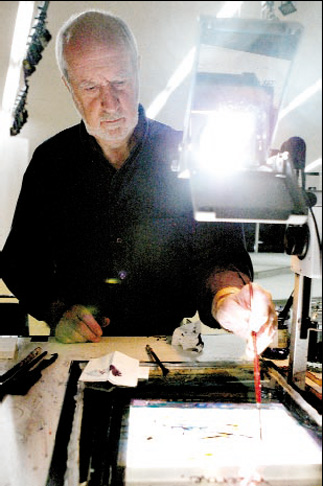 Norman Perryman in performance. Provided by the organizer

PYEONGCHANG ― It’s hard to figure out exactly what the artist Norman Perryman does during his performance. He can easily be mistaken for a stage director, as he often works off-stage, hidden in the dark, his eyes restlessly moving between screens on the wall and his brushes, which navigate across the glass of an overhead projector.
As the orchestra’s music intensifies, his brushstrokes get harder. When the light sounds of the cello prevail, he sweeps across the plate with delicate lines.
In fact his images often work best with contemporary compositions; then they seem to have more freedom to integrate Perryman’s personal interpretation of the music.
“Anything other than Beethoven is acceptable,” he chirps. “Anything after Stravinsky is good.”
“Murmurs in the Mists of Memory,” a four-movement work for 11 solo strings by the contemporary composer Augusta Read Thomas, which was performed by the International Sejong Soloists during the opening night of the Great Mountains International Music Festival earlier this month, was an ideal selection.
The music conveyed a broad spectrum of moods, often abstract, but also lyrical, pulsating, and, at times, grim and intense.
In strict terms, Perryman does not exactly fit into the kinetic art category which he uses to describe his own work, as the phrase, generally, refers to a sculpture powered by energy like a motor or the wind, as in works of Naum Gabo or Alexander Calder.
For those who want credentials, Perryman is a British artist who has performed with musical celebrities like Jose Carreras, Sarah Chang and Yo-Yo Ma to produce images of their music, using watercolors and an overhead projector. But his images go beyond improvisation ― they are based on carefully rehearsed notes of his likely movements.
He makes detailed notes on the score with words like “drop,” “press” and “wipe” as he showed me on a recent afternoon. Then he memorizes each score as best as he can, and rehearses his performance with the musicians.
“It’s like choreography,” he explains. “You follow the brush, and see what the brush tells you.”
Much of his art is based on emotional reactions to the music. The images are often abstract, made up of minimal dots, lines or blots.
Some are more figurative than others, such as the sunset images he produced with the Rotterdam Philharmonic Orchestra conducted by Hans Leenders during “Takemitsu: From Me Flows What You Call Time.” Others are more organic, resembling bizarre shapes from nature.
When he is not actually part of the performance the artist projects his “visual music” on the wall as a backdrop, like with his No. 1 variation from the modern ballet “Invention” which he did with Philip Taylor for the Netherlands Dance Theatre, to the music of “Eight Inventions for Percussion” by Kabelac.
For the audience, Perryman’s images distract, modify and stretch their perception of the music.