Taking a gamble on casinos

Taking a gamble on casinos 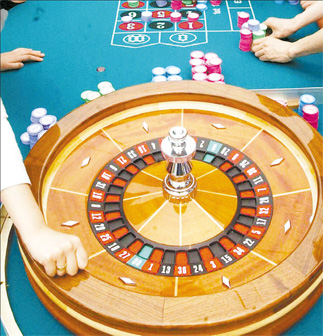 Tourism is booming in Asia and a lot of tourists’ money is flowing through the doors of casinos. Neighboring countries have rushed to establish legal gambling facilities and the Korean casino industry, for fear of being left behind, has been making an effort to expand.
Park Chong-sam, the president of Korea’s Seven Luck casinos, believes that the casino business is the perfect way to stimulate the nation’s tourism industry, but he’s concerned that the public have a negative view of gambling, which might hinder the industry’s expansion in Korea.
Seven Luck is operated by Grand Korea Corp., a company that was created by the Korea Tourism Organization.
Park says that in order to compete with neighboring countries, and for the good of the nation, the casino industry in Korea must expand, even if their are risks involved.
At present the Seven Luck casinos are for the use of foreigners only. Park said foreigners find it easy to understand the importance of casinos to a country’s tourist industry.
Last month the Korea Casino Association organized an International Conference on Casino Development and Strategy, which was held in Seoul. It was the first-ever casino conference held in Korea.
The organizers said that they didn’t expect the conference would bring dramatic changes in the way the general public views the industry, or that the Korean government would allow the establishment of a large number of casinos where Koreans are free to gamble.
However, they noted that holding such an event was significant in itself. They added that they hoped the conference will help increase awareness of increased competition from neighboring countries and the potential role casinos can play in attracting foreign tourists.
Currently there are 17 legal casinos in Korea. The Kangwon Land center is the only casino legally available to locals. Excluding Kangwon Land, the other casinos in Korea earned $503 million last year, a 18.9 percent increase. The casinos received more than 988,000 visitors ― around 16 percent of the foreigners who visited Korea went to one of the casinos.
Casino earnings accounted for roughly 10 percent of the money spent by foreign tourists. Their earnings last year are equivalent to exporting 44,542 cars, and 23 casino customers, on average, spend the equivalent of one mid-sized car.
Revenues at Korean casinos are far below the amount earned in other gambling centers. In 2006 casinos in Macao earned $7 billion and Las Vegas raked in $6.5 billion.
William Eadington, a professor at the University of Nevada and a gaming industry expert, said Asia is becoming the center of the industry. He added that neighboring countries including Japan, China and Singapore are establishing legalized casinos to cater for the growing number of tourists in the region. Eadington said Korea could loose a lot more than a handful of tourists if it does not act fast.
According to information provided by the World Tourism Organization, China will likely be the number one tourist destination by 2020 with a market share of 8.3 percent. Hong Kong is likely to be in fifth place with a 3.6 percent market share. Korea does not even get into the top 10 list.
Japan in particular is moving fast to change its previous stance regarding the legalization of casinos.
Although Japanese authorities haven’t announced solid plans to build casinos, municipal governments including Tokyo and Nagoya are pushing hard for the right to build them, according to Korean experts.
China is looking at the possibility of establishing a casino in Qingdao and in Sanya, in order to boost the economic development of Hainan.
Taiwan is debating whether to build a casino in Penghu and Thailand seems likely to build a gaming facility in Pattaya, one of its most popular tourist destinations.
In 2005 Singapore’s government approved casinos in Marina Bay and Sentosa.
The casino industry in Asia will expand rapidly,according to experts like Eadington. He says the Korean casino business, which has a relatively weak competitive position compared to its current rivals, is likely to be confronted with a series of tough decisions that are likely to decide its fate.
If Korea sticks with the existing current status quo, Eadington believes that it will not only lose tourists to Japan and China but also more and more Koreans will travel to neighboring countries that have more attractive casino facilities.
Forecasting a domino effect, Eadington said Korea will have to lift its regulations on the casinos as neighboring countries lift their restrictions on gambling.
Eadington cited four benefits that legalizing gaming would bring. First legal casinos will help eradicate the negative influence of the “black economy.”
Additionally, it will bring fiscal benefits to the government by generating tax revenues.
Thirdly legal gambling would contribute to the country’s economy by creating jobs and extra tourism ― after all, gamblers need excursions during their breaks from the tables.
Lastly, legal casinos would help Koreans become more familiar with a wider range of gaming, such as Texas Hold ’Em poker, and that would boost demand for gambling services.
Lee Choong-ki, a professor at Kyung Hee University and a major advocate for legalizing gambling in Korea, said that with proper regulation, control and the establishment of a system that would help prevent gambling addiction the casino businesses could benefit the country and its tourism industry.
“Other international gaming countries such as Canada have had great success in ensuring responsible gambling,” he said. “Some of the earnings from the casinos are invested in gambling addiction centers and addiction prevention.
“It is in human nature to enjoy gaming,” Lee said. “Trying to hold it back only creates unregulated illegal gambling, which results in greater damage. It is best to have all gambling out in the open.”
The Korean casino business began in 1967 when the Olympos Casino was established in Incheon. A year later the Walkerhill Casino was opened.
Today Japanese visitors account for 51.3 percent of the customers at Korean casinos. Chinese tourists come second with 25.3 percent, according to data released by the Korea Casino Association.