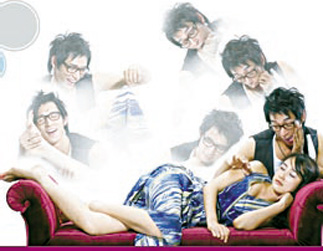 “I Am Your Pet,” a Korean reality show that gives a strange twist on a Japanese TV drama. [Comedy TV]

Women have come a long way to have the vote, to eat at the same table with men and to go to college. However, gender equality still seems to be an elusive goal, as it appears that now it’s time for women to discriminate against men, either for revenge or just for fun. Some financially-established and independent 30-something women have taken to adopting pretty boys in their early 20s as pets. Yes, you read it right ― pets.
Men do not have to panic and pack their belongings to avoid becoming a human lapdog. This is just the storyline of a reality show called “I Am Your Pet,” on Comedy TV. Airing on Sundays at 9:30 p.m. with weekday reruns, the show has become the talk of the town.
Airing with the subtitle “Raising a Pet Boy,” the reality show is obviously inspired by the Japanese TV drama, “You’re a Pet.” A must-see for Korean fans of Japanese TV dramas, “You’re a Pet,” based on a comic strip, is about Sumire, a successful, beautiful and talented bachelorette in her 30s who has difficulty revealing her true self to others. One rainy night, she goes to pick up a cardboard box and finds a pretty boy who is in distress.
After taking him for treatment, the boy asks if he can stay with her and she allows him to, on the understanding that he will be a pet, not a lover.
From then on, Sumire comes to find that she can be her true self and the two develop an unconventional relationship. Yes, it’s an insane concept, but the thought of having a pet waiting at the door after a long day, not caring about how you look in your thick horn-rimmed glasses, won favor with many TV viewers in Japan and Korea.
The reality show on Korean TV takes the element of “a single woman living with a pet boy” and uses it in a manner that can be best described as lurid. First, there are three pairs of single women who receive a delivery of a box with pretty boy figures who aren’t actually very pretty. The three women are Hee-joo, a 33-year-old who is currently doing nothing after studying abroad; Chung-me, a 32-year-old art director who wants to have a pet because she’s been alone for too long and Mock-ryun, a 28-year-old realtor who wants to have a pet boy so she can be at the forefront of a trend. Each has a self-proclaimed “toy-boy” who is in his early 20s and has decided to become a pet because they have quarreled with their mothers or brothers and have nowhere to go.
The real problem starts with their lives together.
The most pathetic couple is Hee-joo, the unemployed 33-year-old, and Sung-min. The couple plays games that are on the verge of being sexually suggestive and are only possible because the show is on cable TV, which has rules that are less strict.
Hee-joo mostly gropes the boy, gets drunk on purpose so as to be carried around and shows off her semi-nude photographs. “I am not trying to eat you, come here you cutie you,” she said in a recent episode. Her pet boy, Sung-min, could not resist her but the slogan on his T-shirt seemed to represent his feelings. It read: “Our savage God.”
The producers may disagree with me, but that was just sheer sexual harassment, with the woman as the molester.
The other two couples are not so different, having suggestive scenes together in swimming pools and the like.
Growing repulsed by the idea of polluting the charm of the original TV drama, I visited the show’s Web site, where I was surprised by the postings from young boys that are pet boy wannabes.
“Take me as your pet,” wrote a 20-something. “I have no place to go and it sounds like fun being an older woman’s pet.”
I felt goosebumps so I silently closed the Web site and turned off the computer, realizing that some TV dramas can turn ugly unless they stay as fiction.