[Talk of the town]

[Talk of the town] 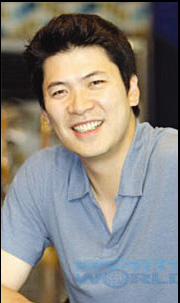 The tooth fairy brings romance Dental treatment is not usually regarded as something that can change somebody’s fate. However, much to the public’s surprise this was the case for actor Kim Sang-kyung. Four months ago, during a trip to the dentist, he came across Kim Eun-kyung, a beautiful dentist who was in charge of his tooth cleaning. “At first sight, I could tell she was my destiny,” he said.
Kim Sang-kyung took the first step by calling his new tooth fairy the next day to arrange a dinner appointment. This start launched them toward their wedding, which is scheduled for Oct. 4 in a Seoul hotel.
“His humble and sincere demeanor appealed to me,” said the bride-to-be. “I was convinced he would make a good husband.” They have already decided on their wedding attire and have started wedding preparations. One reason for their haste is that Kim Sang-kyung will be occupied from October for a year or more, shooting “Sejong the Great.”
The male Kim, 35, has recently been seen in the box office success “May 18.” The female Kim, 30, is currently head of a dental surgery in Jongno, Seoul.
By Lee Seung-eun