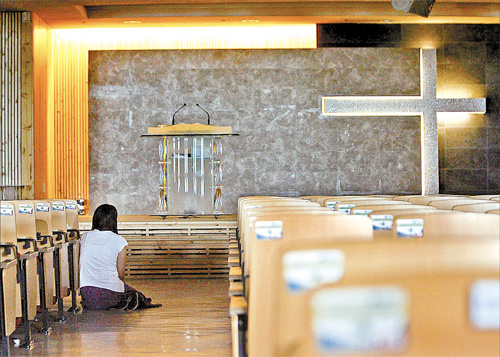 A believer prays on the floor of the Saemmul Presbyterian Church after members of the congregation were taken hostage by the Taliban last month. The hostage crisis, which remains unsolved, has led to a controversy about Korea’s missionary culture. [JoongAng Ilbo] 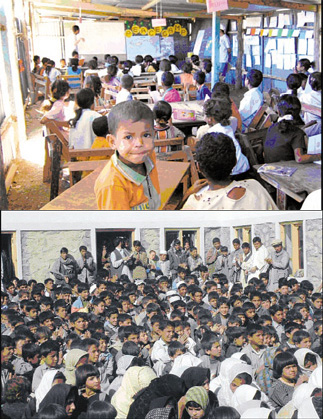 Above: Peace camps in Afghanistan opened by Lee Hyung-woo’s Christian group Frontiers, which keeps the religious element of their work to a minimum. Provided by Frontiers

“Currently, each Korean church has its own missionary program,” he says. “This has led to unnecessary competition and too many untrained missionaries.”
Lee at Frontiers has some tips for prospective missionaries. “We have learned not to force our religions on others. If just one local chooses to convert, that’s a miracle, but that’s not the issue,” he says. “We are already serving our Lord by helping troubled people in conflict areas from a humanitarian perspective.”
Lee’s group often consults with international bodies like the United Nations, and it also has activities like peace camps and mine clearing, instead of evangelizing. “We keep the Christian element to a minimum,” Lee says. The group holds sessions when we share short prayers or parts of the Bible, but the locals do not have to participate.”
Lee and his fellow missionaries have made mistakes, like they did in Afghanistan in 2005. “As a part of our peace camp in the Bamiyan region, we thought of washing the locals’ feet as a way of befriending them,” he says.
Lee explains that foot washing takes place frequently in Korea as a way for teachers and students to bond. “However, the Afghan people thought that it was a Christian ceremony, not a friendship ritual and that caused complications,” he says. “We learned that we can never be too cautious or careful.” This is why he is still uneasy about the hostage crisis in Afghanistan.
Meanwhile, Song points out that the hostage issue offers a “painful lesson” for Korean missionary culture and Korean churches.
“It’s a good sign that reform-minded pastors are gaining more influence and are discussing changes that can be made to missionary culture.”
The unnamed official of a leading Christian group who does not think that the hostage crisis resulted from problems with Korea’s missionary culture, agrees with the claim that Korean churches are engaged in self-reflection over the hostage issue.
“We are aware that a limited number of missionaries have a tendency to act individually, recklessly and dangerously,” the official says. “So we have been making efforts to improve the way our missionaries work.”
In the meantime, Lee and his other colleagues at Frontiers pray every night for the hostages.
Lee Dong-hwa, Park Jong-wha and the unidentified Christian official may have different perspectives, but they share a wish ― the safe return of the hostages.
“I believe that God is not only for Christians. I happen to believe in Christianity and Muslims happen to believe in Islam,” Frontiers’ Lee says. “The important thing is to live faithfully in our own religions and to have respect for each other. And now we are praying to each other’s God for the safe return of the hostages.”