No regrets for G.I.who went North and settled down

No regrets for G.I.who went North and settled down 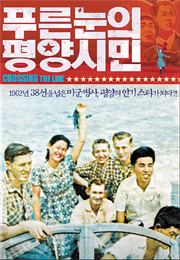 A poster for the movie “Crossing the Line,” which opens today. James Dresnok is the second from the left in the back row. Provided by the producers

Can a troubled American find happiness trapped in North Korea?
That’s the question addressed in the documentary “Crossing the Line,” which opens in Korea today.
“Every person I’ve talked to who has seen the movie has a different opinion,” said Daniel Gordon, the director and producer of the film.
Gordon, filming his third documentary in North Korea, shot the piece on location, visiting frequently over a nine-month period.
He said the North never tried to interfere with the filming or the editorial content, and helped him recover rare archival footage.
The film tells the story of James Joseph Dresnok, one of four American soldiers who defected to North Korea between 1962 and 1965, and the only one still living there.
Dresnok grew up in Virginia in the United States.
Abandoned by his parents, he was raised in an orphanage and then by foster parents. He didn’t finish high school, signing up for the military as soon as he could, at age 17.
After a stint in West Germany and a short-lived marriage, Dresnok signed up for another tour. This time, he was sent to the demilitarized zone.
In the movie he describes falling in love with a Korean woman, but being forbidden to leave his guard duty to see her. He went anyway.
Facing a court martial, on Aug. 15, 1962, Dresnok decided to walk through the mine-laden field separating the North and South and enter the most isolated country on Earth.
He wore combat fatigues and carried a shotgun, which he fired once in the direction of the Americans when they called at him to stop.
“If I lived or died, I didn’t care,” Dresnok said.
He later said he “never regretted” his decision.
Still, Dresnok and the three other defectors tried to escape by seeking asylum at the Russian embassy in 1966. Two of the defectors have since died and the third, Charles Jenkins, was allowed to leave the North. He now lives in Japan.
After the ill-fated escape attempt, Dresnok vowed to try to blend into North Korea as much as possible.
He learned Korean, memorized the juche political ideology, got married twice and now has three children.
Dresnok wouldn’t say what happened to his first wife, who was rumored to have been kidnapped from Romania.
He also became a celebrity by playing the role of an evil American in several North Korean propaganda films. In deteriorating health, Dresnok lives today with his second wife, who is half-Korean and half-Togolese. Speaking in his 1950s-era English, Dresnok said he is happy to stay in North Korea. “This government will take care of me until the day I die.”