Sperm and Ovum take kids on an educational journey

Sperm and Ovum take kids on an educational journey 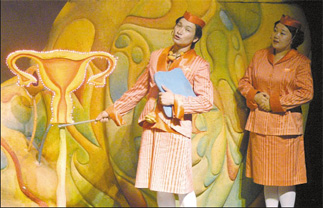 Characters from the musical “Things that Mom Won’t Tell Me.” Provided by the producers

Along with the government’s effort, the private sector is starting to get involved in sex education.
The Educational Broadcasting System has been broadcasting programs about teen sex for some time but in recent years cable channels have begun airing their own sex education features. Donga TV has aired foreign after-school specials dealing with teen sex and last year Mnet aired “Sex Education Dot Com,” a drama series that deals with realistic issues facing teens including date rape, condom use and masturbation. The series turned out to be a success, attracting over 35,000 members to its Internet community.
Children’s plays dealing with this topic are also popping up. A children’s musical, “Things that Mom Won’t Teach Me,” playing at the Sadari Arts Center until next Tuesday, aims to educate children about sex through song and dance.
The play features the characters Sperm and Ovum, who take the audience on a journey from when they meet each other to the birth of a baby.
“We wanted to make a musical which gives the kids accurate information about sex and how a baby is created, but also make it fun for them to watch,” said Lee Bong-gyu, director of To Be Company, which produced the play.
“I found that the sex education at my son’s school wasn’t what I’d hoped for,” said Gang Hyo-jeong, who saw the play with her eight-year-old son. “The hours are too short and not enough attention is given to each individual child. With this musical my son has fun while getting a general idea of how the human body works.”
“We first saw it last year,” said Jeong Geun-hwa, who was with her daughter. “I think that proper sex education should begin in the family. I don’t really trust the schools to give my daughter a thorough and healthy overview about sex.”