Blank pages and a bloodstained umbrella

Blank pages and a bloodstained umbrella 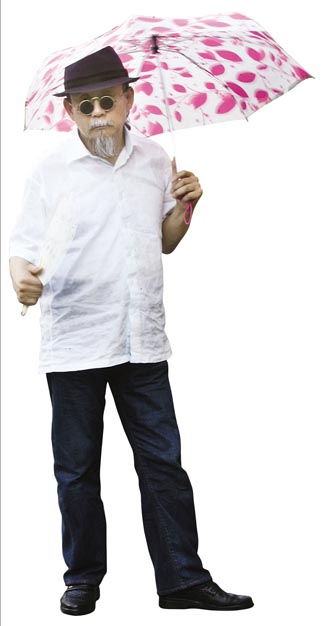 Sung Neung-kyung believes in the art of context. Before major group exhibits, he intentionally shows up late, hours after other artists have taken most of the spaces in the show. Using the context of the time and space he’s given at that moment he improvises ideas for his work.
His style always leads to some interesting pieces.
For his series “Newspaper: After June 1, 1974” at the National Museum of Contemporary Art in 1974, he went to the gallery every day with a razor blade and cut out random articles from newspapers he had pinned to the walls. He threw away the scraps in a plastic box on the floor as a way of denouncing the state’s censorship of the media.
By evening, he left the gallery with a wall full of newspapers that had blank spaces alongside a heap of discarded articles in a box.
After Sung had done this for the next two months, one art critic asked why the artist hadn’t touched the newspapers’ advertisements during his performance.
He didn’t have to wait too long for somebody to provide him with an answer.
In October 1974, shortly after the critic’s comments, the Dong-A Ilbo newspaper began running blank advertisements.
This was after the Dong-A’s coverage of student protests against the military regime had annoyed the government, which retaliated by putting pressure on the paper’s advertisers to stop placing ads. The newspaper ran blank ads for the next seven months.
The incident was a perfect example of the kind of satire sought out by a militant performance artists in the 60s and 70s, including Sung, who believed that the context of social history should be directly related to artistic creativity.
“I really enjoy the idea of creating an impetus in my work,” says Sung, “It forces me to challenge the system and constantly see things from an outsider’s point of view.” 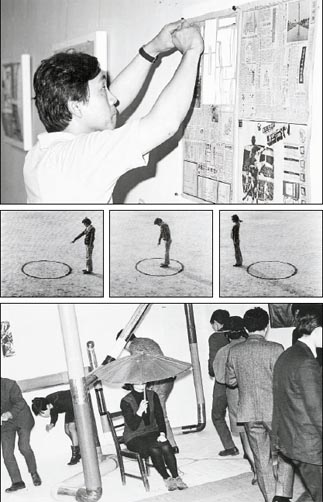 Newspaper: After June 1, 1974.” Middle: “Here and There” by Lee Gyeon-yong. Above:“A Happening with a Plastic Umbrella and Candle” by Jeong Gang-ja Provided by the organizer. Left: Sung Neung-kyung out for a stroll. By Ahn Yoon-soo

Sung is one of the main participants in “Performance Art of Korea 1967-2007,” a retrospective which opens today at the National Museum of Contemporary Art.
On a recent weekday afternoon he was clad in a loose pair of black jeans, a white hemp shirt, a black Trilby hat and he sported a goatee. He was flipping through a notebook packed with handwritten catchphrases from movie posters that he had jotted down as he wandered the streets looking for ideas. He was dressed in a younger style than his artistic contemporaries, most of whom are now art professors and veteran critics in their 60s.
“Abstract paintings were everywhere by the time I left the army in 1973,” he says. “I had one painting exhibition, and that was it. I couldn’t do it. Who needed another oil painter in Korea?”
In the art world, Sung is known for his unyielding character. He has never sold a single work during his 30 years in the business. He rarely uses color in his works, and has never taught at a university, a rare distinction for a veteran artist in Korea.
“You can tell that the edginess in his works derives from his personality,” says Lee Gwan-hun, the curator of Project Space Sarubia, who worked with Sung during an exhibition at the Soma Drawing Center earlier this year called “Drawn to Drawing.” “He is a tough artist to convince, and that’s exactly what his works are all about.”
Much of Sung’s work reflects the urgency of art as practiced by many avant-garde performance artists of his time, who were noted for their decadence and use of radical ideas as a form of resistance against the military dictatorship.
In a famous episode from an art performance in 1967 called “Transparent Balloon and Nude” Jeong Gang-ja, a female performance artist, made news by showing up topless on- stage at a music cafe. She was surrounded by male performers who fixed balloons to her chest.
Jeong caused more shock by stating during an interview after the performance, “I would go completely nude if I had a reason to do so. If that’s what it takes, I would even die during a performance.”
Kim Kyung-woon, the curator for the National Museum of Contemporary Art, calls performance art of the ‘60s and ‘70s “a happening art neglected by critics who branded it as demoralizing.”
“It was a statement of the struggle engaged in by artists that they breathed in a devastating social reality when the country was at the peak of political repression,” Kim says. “As the political mood got darker, the works turned more restrained and metaphorically intense.”
For decades, Korean art was divided into two camps ― those who were in favor of abstraction and political-minded minjung artists from the people’s art movement. Performance artists existed somewhere in between.
Perhaps the tension in Sung’s works derives from the subtlety required to stand on the dividing line between the two camps. He graduated from Hongik University art school, one of the nation’s best, with a degree in Western painting, but never pursued a career in that field.
He turned to performance art as a way to integrate social reality with art, but was excluded from minjung art for being “too subtle” in his political expression.
Sung’s dilemmas are hinted at in “Location,” photographs that depict the artist posing with different parts of his body covered by the influential art magazine Space. 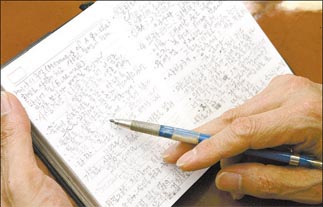 His use of metaphor in the work is playful, but often disturbing and profound, questioning ways to “position” art and artists in a social context.
In the photograph series, he placed the magazine on the floor and stood on top of it; He fixed pages between his toes while holding up one leg. In other images, he painfully holds the magazine with the tip of his lips or slips it under his armpit.
His other body of works are simpler experiments that test the body’s limits.
In “Contraction and Expansion,” for example, he stretched his body as wide as possible and then shrank to the ground to make himself as small and narrow as possible.
“Back then, critics were bored to hell,” he chirps. “Strangely, now they are simply amused. You always have to watch what critics say.”
Much of his later works were playful distortions of newspapers.
For the Seoul Modern Art Festival in 1979, he submitted a series of drawings made on newspaper photographs in which he mimicked graphic signs like arrows and other marks used in newspapers to indicate murder scenes or violent incidents, complicating the viewer’s perception of reality.
In another series, he took random photographs from his family album and painted black bands over the eyes of the subjects in the way newspapers use this device to conceal the identity of accused criminals.
By 1989 he got sick of working with newspapers. As an effort to end the series, he placed sheets of newspapers on the wall and covered every page with black shoe polish.
It was Sung’s minimalist way of burying the art of his past, leaving them entombed within their own history.
But he also realized that the context of performance art today is not the same as it was.

“In today’s art world it’s style that makes an artist, not the content” he says, “That brought a great shift in art.”
If action summed up his earlier performances, now he chooses to collect, assemble and distort dialogue and catchphrases from movies and advertisements.
Recently, he compiled a manifesto for his art as a way of responding to the irony and paradox of puns in today’s pop culture.
The manifesto reads:
-Art is expensive trash.
-Art communicates miscommunication.
-Art is easy, life is hard.
-Art is a violence of intuition.
-Art is speech using other people’s words.
-Art is the shadow of a distraction.
-Art is widely spread.
-Art is an aura without color.
-Art is dead, artists don’t exist.
-Art is a dreaming freedom.
Did he really mean what he had written? No one knows for sure.
After all, for Sung, art is just the shadow of a distraction.