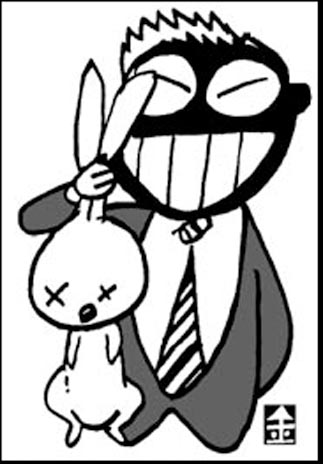 Karl Rove, who recently resigned from his post as deputy White House chief of staff for strategic planning, is known as “Bush’s brain.” He made Bush, who had been largely unemployed until the age of 40, governor of Texas and president of the United States. Rove thinks and Bush acts; if Bush is a commodity, Rove is the merchant who sells it.
Rove did not mind employing underhanded tricks or digging for dirt and he was known as the “hound of the landfill.”
The man stole some of the Democratic Party’s official forms during the Illinois state treasurer election when he was a 19-year-old supporter of the Republican Party. He created a fake Democrat commercial using the stolen document, advertising that the Democrats would provide free beer, free food and free hookers, ruining the Democratic Party’s campaign.
During the election for the governor of Texas, when he allied with Bush, Rove said the female incumbent governor was a lesbian during a telephone opinion poll and succeeded in gaining more conservative male votes.
And during the 2000 Republican primary for the presidential election, Rove spread rumors, including one that said Bush’s rival John McCain had sired an illegitimate African-American child and that he betrayed the United States after his capture in Vietnam.
Rove’s campaign strategy is to provoke a fierce debate that explicitly divides the voters with pros and cons and pulls even passive citizens into the fray.
For instance, he successfully drove four million conservative Christians to vote, who had not previously been to the polls, by highlighting issues like abortion and homosexuality during the 2004 U.S. presidential election.
This is contrary to the strategy of Dick Morris, one of Bill Clinton’s leading advisers, who specialized stealing the support of a rival’s base by taking over his issues.
Park Geun-hye, the former presidential hopeful of the Grand National Party and its former party chairperson, secured traditional conservative votes, whereas her rival Lee Myung-bak aimed for reform-minded conservatives from the non-traditional regional bases of the GNP.
The GNP presidential candidate Lee continues this strategy, asserting that he wants to change the character of the GNP. His rivals in the party thinks Lee intends to punish the party because so many voted against him in the party primary.
Embracing the ideas and supporters of the former party chairperson, Park, seems a difficult task for Lee.

*The writer is an editorial writer of the JoongAng Ilbo. [jinkook@joongang.co.kr]