[BOOKS IN BRIEF]Dancing with the enemy

[BOOKS IN BRIEF]Dancing with the enemy 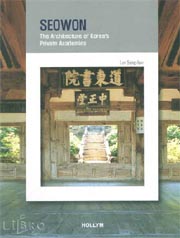 The complete collection of the “Korean Cultural Series,” (Hollym Publishing Ltd) prepared by the Korean Foundation, was recently released in English. The books cover everything from the art of traditional Korean knots to modern Korean ink paintings.
The publication of the nine volumes, which took two years to complete, is a general introduction to Korean art and culture for foreigners. Written by experts in the field, the books cover Korean palaces, the architecture of private academies, seasonal customs, Korean landscape painting, modern Korean ink painting, contemporary Korean art, Buddhist sculpture and the architecture of Korea.
In “Korean Academies,” Lee Sang-hae, a professor at Sungkyunkwan University, a school noted for its Confucian tradition, delves into the historical and ideological background of the private academies. The book on palaces focuses on five major palaces in Seoul. Other books have some revealing nuggets, such as the story that early landscape paintings from the Unified Shilla era were done on tombstones and bricks and that the authorities offered a traditional Korean knot made into a cross during Pope John Paul II’s visit to Korea in 1984.
David E. Shaffer in “Seasonal Customs of Korea” writes that Admiral Yi Sun-shin took advantage of ganggnag-sullae, a circle dance practiced by women during Chuseok, to devise his ingenious deception strategies. He sent his troops ashore in formations that mirrored the patterns of festive dancing.
By Park Soo-meez