[BOOKS IN BRIEF]Who do you think I am?

[BOOKS IN BRIEF]Who do you think I am? 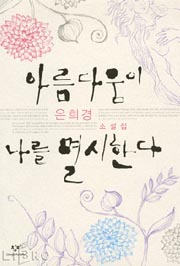 “Discovery of Solitude” a story in the collection “Beauty Disdains Me” by Eun Hee-gyeong begins with a narration by “K.” After failing the judicial examination for 15 years straight his girlfriend and his family have deserted him. On his 38th birthday, he celebrates alone in a coffee shop and incidentally meets a man who insists that they had stayed together in a lodging house 15 years previously. During the conversation, the man mentions an inn in W city and K decides to head for the place. On the road to W, K meets a female dwarf, who tells him her story. “I’ve have many selves split between times and spaces. Sometimes I am shy, talkative or just stupid. Sometimes I lose my temper. But they are all me after all,” says the dwarf.
Ever since she published her first novel “The Gift from a Bird” in 1995, Eun has been a successful writer with hits like “Minor League” (2001), “Secret and Lies” (2005) and now “Discovery of Solitude” has been nominated for the 2007 Hwang Soon Won Literature Awards. The novel features K’s search for the self, which is Eun’s favorite subject. “Eun’s novels deal with the dissociation between how I regard myself and how I am regarded by others,” said Kim Hyeong-jung, a judge at the Hwang Soon Won Awards. By Kwon Geun-young