Homo sapiens have had it,Homo digitus is the future

Homo sapiens have had it,Homo digitus is the future 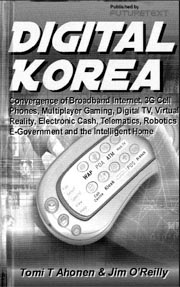 It’s often said that Korea is a “digital nation” and “the most connected society in the world,” but what do these newspaper cliches really mean?
Tomi T. Ahonen and Jim O’Reilly think they have the answer.
Their book “Digital Korea” says that this country is now a giant laboratory that is experimenting with the future of human life through the use of digital gadgets, big and small. The authors’ thesis is that the digitalization of human interaction will change every aspect of our lives.
Their conclusion is that the young people of Korea ― whom they call Generation C ― will actually create a new breed of human beings. Generation C+1 will be so radically different that they will no longer be Homo sapiens ― they will be Homo digitus.
Ahonen and O’Reilly say that “Digital Korea” is about the future, that it’s not science fiction, that the future is “already visible in South Korea.”
They use some striking statistics to back up their claims. For example, the fact that 57 percent of music sales in Korea in 2006 were digital, compared to just 10 percent in what they see as a sluggish, unwired United States. Or that only 7 percent of Germans buy ringtones for their cellphones, compared to 97 percent of Koreans.
They also point out that the second-most desired car in Korea is Solid Pro, a virtual car from the online massive multiplayer videogame “Kart Rider.” Beating out Ferraris, BMWs and Aston Martins, Solid Pro cruised into position behind the first-place Porsche Carrera on the strength of the 12 million Koreans who have played Kart Rider.
Videogames allow players to experiment with different personalities, as do the avatars or mini-mes that people devise for themselves in social networking sites like Cyworld.
Korea is still a conservative country but changes are taking place and many of them are being forged in Cyworld.
Forty percent of Koreans have created an avatar ― compared to just 18 percent in the U.S. ― and thus, “Dating in Korea often starts inside virtual worlds, using avatars,” write Ahonen and O’Reilly. “The real people behind the avatars feel they can be more open in virtual worlds.”
The antics of avatars in Cyworld have become well known, which means the more fascinating aspects of this book are the authors predictions on how Homo digitus will function.
In the “Electronic Government” section they analyze the Korean Ubiquitous Cities project and forecast that this ambitious attempt to digitalize many activities of urban-dwellers will lead to cities that look very different to the ones we live in today ― picture something a bit like the scary place where Tom Cruise lives in “Minority Report” where billboards for Gap and Gucci offer him personalized shopping ideas as he passes, based on his previous credit card purchases.
One can well imagine this happening in parts of Seoul before long, but this section is also the most disappointing because the authors fail to discuss the possibility of digital government. After all, representative democracy came into being because their were far more citizens than seats in the parliament building. However the digital version of the national assembly could be of infinite size, with an infinite number of electronic voters. And thus we no longer need politicians or their lies. Now if that’s what Homo digitus will create, bring him on.
Digital Korea