Just a man and a woman, a nation and its fate

Just a man and a woman, a nation and its fate 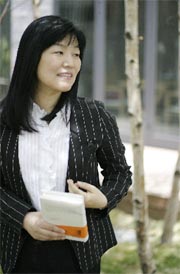 Shin Kyong-suk appeared shy and cautious as she took the stage last week at the Kyobo Bookstore and settled into a chair to read from her latest novel “Lee Jin,” an event organized by the Daesan Foundation.
It was her first public reading of the book, she told the modest audience. Sitting next to her was Kim Ji-suk, a stage actor, and the poet Lee Mun-jae, who wrote a commentary for Shin’s short novel “The Blind Calf,” which has been translated into English and published in the Harvard Review.
“Lee Jin” is a historical epic set in the late Joseon Dynasty. It depicts a love affair between a royal dancer from the Joseon Dynasty and a French diplomat assigned to Korea. The story was derived from a 1905 memoir by France’s second consul to Korea in which he described a relationship between a French man and a dancer from the royal court.
Based on the consular’s memoir, the dancer in the book moves to Paris after marrying the Frenchman and there she briefly enjoys the freedom of urban romance and the intellectual trappings of Parisian society. But, gradually, she becomes alienated and her life in exile leads to depression, sleepwalking and suicide. Shin’s rich descriptions of the heroine’s exposure to Western culture and her European lover leaps far beyond the literary cliches of East and West as it focuses on the heroine’s despairing search for an identity far from the caged life of the palace.
The story is beautifully laced with lyrical depictions of the pain and loss that haunt the dancer as her romance with her lover begins to fail. Eventually she feels compelled to spread poison on the pages of her French dictionary ― a gift from a French missionary she met when she was a child ― and she then swallows them.
There are also delicious details of early Korea as seen through the eyes of the French diplomat.
“I was hesitant to do the story for a long time, because the passionate love affair between a beautiful dancer and a European diplomat just seemed too ornate,” says Shin, who is known for stories that delve into the lives of ordinary people and the wounds they suffer as they struggle to survive.
“But there was a phrase in the memoir that said the heroine, in her later years, was so thin and devastated by loss after her return home from Paris that people mistook her for a monkey dressed in women’s clothing. That image stuck in my mind, and I felt like the woman was crying next to me, begging me to write her story.”
Some of the most revealing descriptions in the book are found in the chapters that delve into the heroine’s relationship with Queen Min, the last empress of Korea, who was assassinated by Japanese conspirators after she advocated stronger ties between Korea and Russia in order to rein in Japan’s imperial ambitions toward Korea.
In the book, Shin has finely layered descriptions of Min as somebody who suffered greatly, in contrast to many dramatized versions of the queen as an aggressive nationalist anxious to grasp political power within the palace.
In one scene, where the young heroine accidentally encounters the queen for the first time, Min, anguished by criticism she has received from her father-in-law and male politicians, takes the girl, hungry and orphaned, to her room. There the queen feeds her with crushed pears, putting the juice into the girl’s mouth as if she were a baby bird.
The girl is crying and the queen asks in a gentle way, “Why are you crying when you are eating such delicious food?”
The whole scene is laced with so much delicacy that it poignantly captures the loss of affection the two women have suffered in their own lives.
“It was really just a way for me to stop Lee Jin from becoming a king’s woman,” she says. “But near the end of the story, I became concerned that she was made into a queen’s woman instead of being her own woman.”
Critics have interpreted the love affair in the novel as a metaphor for Western imperialism toward Korea from the 19th century onward.
Lee Mun-jae compared the heroine’s dilemma away from home to the discord caused by Korea’s attempts to assimilate into the West at the turn of the twentieth century.
Indeed, in a melancholy letter sent by the heroine to her lover in Morocco, there are references that the affair was part of the history they had experienced together: “I always thought that you were powerful and I was weak. I lived, believing that you were France and I was Joseon, when after all we were just a man and a woman.”