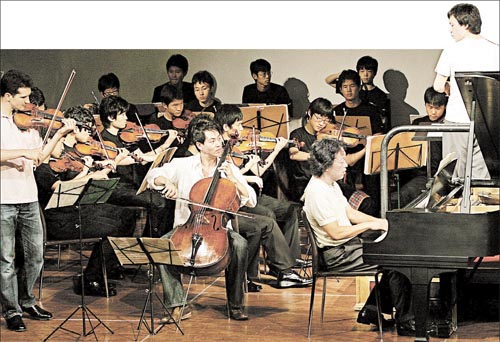 
There was a glitter in the eyes of Jung Myung-hoon after he finished conducting the orchestra. He looked as if he knew how wonderful the performance had been.
Jung turned toward the orchestra and added one more pair of hands to the applause that was coming from the auditorium.
The conductor held one thumb up to the orchestra’s members and then held up his fist and shouted, “Bravo.” It was Jung’s way of conveying the audience’s ovation to the orchestra members.
The orchestra that had performed with Jung Myung-hoon and his son Jung Min, consisted of 60 orphans from the Busan Boystown. As the applause rose in volume the cheeks of the middle and high school boys turned red.
The ties between conductor Jung Myung-hoon and the orchestra began in 2005.
Jung Myung-hoon brought his orchestra to the orphanage from time to time to teach the children music.
The fruits of his efforts were presented at a Fund Raising Concert for the Boystown. The orphans performed Ludwig van Beethoven’s Symphony No. 5 in C minor. Their playing was still immature, as Jung had expected.
The conductor stood on the podium without a baton in his hand. Listeners with a keen ear could notice the exertion of the orchestra members as they tried to follow Jung’s hands and play the instruments as they had been instructed.
During the concert, the conductor gave the orchestra some silent applause right after the first movement had been performed.
He looked into the eyes of the cello and double bass players. Park Jae-seon, 17, returned the look and started playing the second movement.
“Support is essential for a person to major in music,” said Park, who has decided to study music at university. “But, we had been alone.”
Sister Kim Sophia of Boystown recalled her encounter with a homeroom teacher of a student who had skipped school and didn’t seem interested in studying.
“Don’t think of him as a spoiled child,” said Kim to the teacher. “All he needs is to learn music.”
The love and consideration of the music maestro has been passed over to the next generation. At the end of the Boystown concert, Jung’s son, Min was handed the baton.
With his father playing the piano, Min conducted the orchestra in Beethoven’s Triple Concerto. The son became like the father, drawing out the the secrets of the music.
More than 500 boys between the ages of 3 and 18 live at the Busan Boystown established by the Sisters of Mary. The orchestra was formed in 1979. The concert on Monday was a challenge for the children. They had to practice six to seven hours a day to be ready. Donations of 170 million won ($180,000) were made at the event, which will be used to support lessons and musical instruments for the orphanage.
Jung performed another charity concert for Boystown at the Shinsegae Department store in downtown Seoul even though his eldest sister died this week.
“For me, the next generation is the priority,” Jung said, “This orchestra may not be the best one in Korea but they have an abundance of spirit. I am constantly astonished by that while I am conducting them.”
The 300-seat hall at the department store was full. “The performance was beautiful,” said pianist Shin Su-jung, a sponsor of the event. “Jung is a father who knows how to share his love. He is a true maestro.”