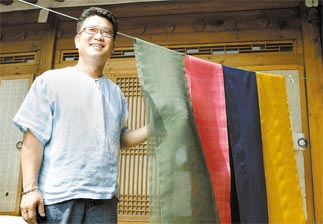 Luke Hong, a fabric artist who specializes in traditional natural dyes, at his studio in Samcheong-dong. By Kang Uk-hyun

As a fiber artist who specializes in traditional dyes, one of Luke Hong’s annual rituals is to visit Oriental medicine clinics.
The purpose of his trip is to gather ingredients for his natural dyes, in which he uses a lot of medicinal herbs including tree bark, roots, nuts and sections of animal organs or skins that are used in Oriental medicine.
“Squeeze some sap from an Indigo plant and rub it on your skin after you have been bitten by bugs,” Hong said recently. “Within seconds, the itchiness will go away.”
Hong’s dyes are used to make bedding, cloth and patchwork quilts. Hong began working in this field as a child when he helped his mother, Cho Su-hyeon. She is an expert in traditional Korean knots and has been designated as an intangible cultural asset.
He harvested plants from his mother’s backyard and used them to dye thread before it was made into knots. Ever since then, his fingertips have been tinted light shades of blue, yellow and red.
For generations the science of natural dyes had enthralled textile experts in the East and West.
In Korea, where natural dyes have been beloved by the aristocracy dating back to the Three Kingdoms Period (53 CE - 668 CE), the techniques used have been carefully studied by medical researchers seeking to treat chronic skin diseases like atopy.
Natural dying involves laborious handwork. When using traditional ingredients like golden turf, a kind of grass, or indigo, which Hong raises in the backyard of his studio, it becomes even more complex.
In Indigo dying, leafs are plucked, chopped and placed in a pot of water for a few days with a heavy rock on top. The liquids are then drained and the leaves are taken out of the pot. 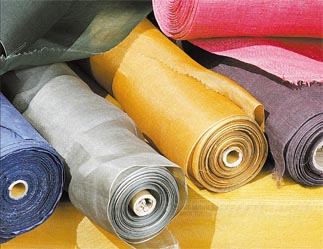 Traditional dyes in Korea are linked to the philosophy of yin and yang and the five elements of metal, wood, water, fire and earth.

Burnt crushed oyster shells are added and the mixture is left to sit in a warm place for three to four days.
It is then stirred for several hours until the liquid turns blue. A bucket of powdered burnt rice straw is added and the dye is stirred again. For a stronger shade of blue a measure of rice wine is added.
Once the dyebath has been prepared fabrics such as wool or cotton can be dipped into the pot. After a few minutes the fabric is taken out of the pot and rinsed in cold water. When the fabric is exposed to the air it turns navy blue.
It was part of the mystique of Levi’s jeans that they were colored with indigo dyes when the company produced its first denim jeans in 1853 in California. Indigo originated in India and traveled to Korea through China and later went on to Japan.
Rarity also boosts the price of the pigment. Because of the highly meticulous procedure, fabrics dyed with indigo tend to be expensive. If a single roll of white fabric ― about 20 meters long ― costs around 300,000 won, ($332) it will cost 1 million won if dyed with indigo.
Indigo dying entered a period of decline with the advent of synthetic dye in Korea around the mid-19th century. It was left to be practiced by small groups of rural artisans. It was practically extinct for nearly half a century, when the plant died out during the Korean War.
Indigo dies and disappears from an indigo plot after a year if the seeds aren’t re-sown.
It was only revived in 1979 when Cho, Hong’s mother, went to Japan, where the technique had spread from Korea, and brought home a spoonful’s worth of the plant seeds that she bought for a price close to “a few buckets of rice.”
She gave the seeds to artisans in Naju, the village where indigo dyes originated in Korea. In 1981, the indigo harvest finally succeeded, reviving an age-old tradition.
Meanwhile the technique, highly cherished by the Japanese, was used to make luxurious ceremonial garments for historic warriors like Toyotomi Hideyoshi.
There are historical records that certain natural dyes were a status symbol in early Korea. One example was the widespread use of expensive plants that were harvested across the nation to get red pigments during the reign of King Sejong.
When large parcels of land that had been used for rice paddies and vegetables were used to grow plants to produce red pigments instead, King Sejong officially banned people from wearing red. He may have also been trying to preserve the wearing of extravagant attire as a royal privilege.
There is an elaborate description from early Korean history in which King Goi of the Baekjae period, in the 28th year of his reign, showed up at his office in a purple robe with large sleeves that matched his blue silk pants, a hat adorned with golden flowers, a white leather belt and black leather shoes.
According to records from “Gyuhap Chongseo,” a women’s compendium, traditional Korean dyes used onion skins, pomegranates, squid ink, shells, mugwort, arrowroot and insects that live on sumacs and cactus.
A popular dye that has recently been introduced into Korean life is yellow soil, which has been used extensively for bedclothes and underwear. It is sold on major home shopping channels and street carts.
In Jeju Island fiber artists invented a unique dying technique that uses green persimmons and turns fabric a reddish brown.
Traditional dyes in Korea are heavily linked to the philosophy of yin and yang and the five elements theory, meaning that traditional dyes have been crafted by experts to create clothes that enhance a person’s karma or sense of well being.

There are five basic colors in the theory ― white stands for metal, green for wood, black for water, red for fire and yellow for earth.
Each color is also associated with body organs and one of the five points of the compass; white is for the lungs and large intestine, green is for the liver and gall bladder, black is for the kidneys and bladder, red is for the heart and small intestines and yellow represents the spleen and stomach.
Yellow also stands for the center among the five directions, which limits the right to wearing yellow clothing to kings.
The idea of color association was actively practiced in ancient China, where the word for emperor is a Chinese character that means “the yellow king.”
On a general note, natural dyes do come with some inconveniences. They only work on natural textiles, and the pigments fade faster than synthetic dyes. In many instances just a few drops of vinegar can change the colors of a naturally dyed fabric.
“It’s a healthy sign,” Hong says. “Our body is part of nature. It works best with naturally dyed clothes.”
The art of natural dying begins with getting the right ingredients for the recipe.
Yellow is often an easy color to make.
Up to 60 percent of the plants found in Korea’s mountains can be used to produce yellow pigment. Black is the hardest dye and it’s impossible get a result that is 100 percent black.
As a finished product, traditional natural dyes tend to have a hazy density, contrasting starkly with the pigments produced by synthetic dyes, which are clearer and more intense.
“If you stare at them for a long time, natural dyes exude colors that are very subtle and deep,” Hong says. “Then after a while, it makes your eyes feel more comfortable. That is a big difference from the experience of looking at synthetic dyes.”