Ship carries hope from many cultures

Ship carries hope from many cultures 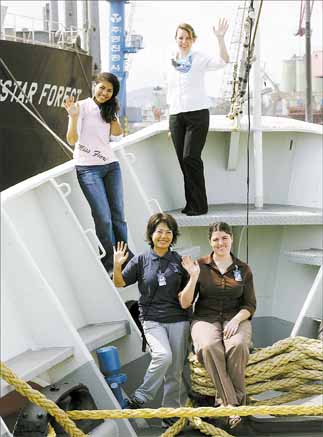 Stepping onto the MV Doulos ― the world’s oldest oceangoing passenger ship ― is like visiting a global village. Around 350 volunteers from 50 nations are on board, busy sailing to different continents, trying to make a difference in the world.
The ship is now in port at Incheon Harbor in Korea after stops in Pohang, Busan and Mokpo. It is open for public tours until Sept. 4. The tours are guided by volunteers who dream of embracing the world.
Hong Youn-sook is one guide. After spending six years onboard the Doulos, the middle-aged Korean has visited 73 countries so far.
“But it’s not all about traveling,” Hong said. “It is about bringing help, knowledge, and hope to the people of the world.”
The ship was originally built for a different purpose. She was a freighter when launched in 1914 and over the years served as a migrant carrier and a cruise ship. In 1977 the ship was purchased by its current owner, “Good Books for All,” and operated as a floating book fair.
The owner is a private nonprofit charity registered in Germany and funding comes from volunteers, friends and family. It also is funded by sales of books and souvenirs and by gifts and donations from trusts, foundations and community groups.
The Doulos has visited more than 100 countries and 500 ports so far, providing assistance to communities in need.
Hong shared her story.
“There is a hole in everyone’s heart,” she said. She confessed that she tried to fill the hole in her heart with fame and money. But she felt something was missing.
“I wasn’t satisfied,” said Hong. “Ironic as it may sound, the empty hole was filled up as I let go of all greed and the ‘me-centered’ world.” She said giving to others has been a blessing.

The Doulos crew provides medical help and aid to people in developing countries. Provided by the organizers

Hong is a tour guide on the ship. She speaks three different languages - Japanese, Korean and English.
Michelle Younis, who joined the crew right after graduating high school in Lebanon, has spent a full year on the ship.
“It all started in Nigeria,” Younis said.
When her family was living in Nigeria, Younis met unfortunate civilians suffering from internal wars. As a young child, she was hurt because she was not able to help relieve their pain.
“I did not know how to help them,” she said. But Younis was encouraged to help when she came across the Doulos in Lebanon. “I saw volunteers influencing individual lives,” she said.
Younis works in the ship’s catering department. She said that approximately 1,000 meals are served and 50 loaves of bread are baked every day.
Younis said Manila was a memorable port of call.
“Filipinos expressed their love and gratitude by feeding us,” she said. “Developed countries donate materials such as ceiling fans or shirts, and we are thankful for that too.” But love is not measurable, she said.
In Manila, Younis met a homeless family. The parents had drug problems and their four children were garbage pickers.
“They were living in misery,” she recalled. “But when I held the mother’s hand, her face brightened up.” Younis still remembers the look on that mother’s face.
Younis says bringing hope to others isn’t all that difficult. “You just have to be willing to be the change yourself.”
Though Younis finds her work meaningful, she does experience culture shock from time to time.
On the ship, Younis shares a cabin with two other shipmates, one from South Africa and another from Australia. “We have different habits,” she said.
Bridget Tallon from Australia has been a crew member on the Doulos for two years. She was part of the advance preparation team in charge of managing the crew.
She will start working for the media relations department next week.
The opportunities to learn and share knowledge started when she visited a cafe in Australia.
“There was a man named Mark in our town,” Tallon said. “Everyone avoided him because he walked around the streets shouting.” One day, an anonymous person attacked Mark with a hammer and hurt him badly.
Mark was frightened but the cafe staff provided him with a warm place to stay and comforted his soul. “The cafe staff loved him and protected him from danger,” Tallon said.
She was moved by their compassion and challenged to do the same, so she joined the Doulos crew.

The ship carries approximately 100 tons of literature, which is about 500,000 books. Photo by Kang Uk-hyun

On a visit to Taiwan the ship invited migrant workers and homeless people to a program onboard.
“We expected around 80 people to come but only 15 showed up,” Tallon said. “It was awful.” Since Tallon was the host, she felt the low attendance was her fault.
But an incident turned the situation around. An expatriate observing the show started crying, deeply moved. The woman opened up and confided about the tough past 15 years of her life. She was about to end her life.
“But the performance that day had saved her,” Tallon said.
Carlien Govender from South Africa is also part of the group.
During her four years on the ship, her most memorable visit was India.
“A long line of people were waiting to have a tour,” Govender said. “When arranging the line, I met a peanut seller named Lakshmi.”
Lakshmi was a young girl but she already had three small children. She was desperate, being the only breadwinner in the family.
Govender took a photograph of Lakshmi and gave it to her a few days later.
“She jumped up and down, it was as if she had received gold,” Govender said.
Those moments remind the crew that small acts of kindness make a difference.
“Life onboard means giving up your comfortable life patterns and serving others first,” Tallon said.
In that regard, she respects the Korean hostages in Afghanistan for their voluntary work. “They went to provide medical help knowing that it is dangerous,” Tallon said.
Compared to that mission, “the ship is safe,” Tallon said. “And it’s a fairly Western culture. It is not volunteering in the wilderness.”
Said Younis: “You must take a step forward to help others. Your actions do make a difference.”
The Doulos departs Incheon on Sept. 5 for Hong Kong.

The Merchant Vessel Doulos
Listed in the Guinness Book of World Records as the oldest oceangoing passenger ship, Doulos provides medical and educational aid to people in need. The ship has visited 292 ports and 103 countries as of January 2007.