[TV Review]Stories of real life are a refreshing change

[TV Review]Stories of real life are a refreshing change 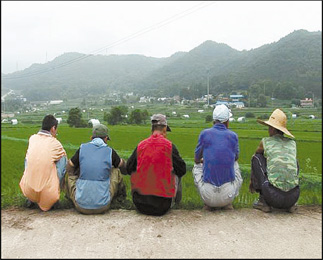 A scene from “Three-day Documentary,” which offers a glimpse of real people. [KBS-TV]

I thought I’d had enough of the Grand National Party primary. The two prime contenders, Lee Myung-bak and Park Geun-hye, dominated almost all news reports from newspapers to TV news programs until the rivalry ended in Lee’s victory last week. I thought I’d seen too many photographs and stories about their route to the Blue House. This was why I initially frowned upon yet another feature on the primary, KBS’s “Three-day Documentary” at 10 p.m. on Thursday.
It’s been over a week since the primary ended in Lee’s victory and I could have learned the lines of Park’s memorable speech by heart by then. Another repetition of the tried-and-trusted focus on Lee and Park could be a challenging test for my patience. However, I found myself glued to the TV screen, digested the 45-minute documentary feature and found it to be the most interesting and intriguing look at the primary.
The attraction of the documentary lies in its perspective, as it approached the primary from the general public’s point of view.
Instead of thrusting cameras before Lee and Park, the producers filmed the audience hailing the contenders on stage. The premise of the show is to film a documentary about a certain incident or place for three consecutive days and make it into a 45-minute feature.
The show’s mission statement is to “draw a self-portrait of the contemporary times by looking into the space and its people.” The key here is the depiction of people and the space they occupy, without any addition of artificiality. There should be a certain level of subjectivity in trimming the three days’ worth of film down to a 45-minute feature, but the producers showed virtue in trying to talk to people with differing perspectives.
Under such a premise, the producers took their cameras around the stadiums for the contenders’ joint election stump. Instead of vying for an interview clip for Lee and Park, the producers roamed the audience. And that’s the place where the primary became a feast to enjoy.
The camera delivered the heat and fun of the atmosphere by filming a series of interviews of voters letting loose passionately about their support for candidates. There was a middle-aged man who boasted about his invention of a nouveau three-forked hairstyle to support his candidate. On the other corner, the camera featured a carefree middle-aged woman selling beer around the stadium, who said, “I really don’t care who wins. All I care about is selling as many bottles of beer as possible.”
On the day of the vote, the producers featured elderly gentlemen complaining about the inhospitality of the election committee for not giving them ice cream. “This is just too hot a day to vote! We deserve ice cream for coming out to cast our vote,” grumbled one man.
The show also found a niche in interviewing two unsuccessful contenders, Hong Joon-pyo and Won Hee-ryong. “All I can do is play a supporting role. Now I don’t care who wins in the primary,” Hong said with a bitter smile.
Overall, the documentary was an honest and enjoyable depiction of the meaning of the primary for people from various walks of society, not just Lee and Park.
The feature on the Grand National Party primary is just one episode; the show takes viewers to various parts of the country every week. On a recent week, the show featured the opening of a tiny park that the shopkeepers of rundown Bupyeong Market jointly established. In others, the producers brought cameras to a rehabilitation center for the homeless, and to group interviews of competitive bankers-to-be.
These stories are not the kind plastered on newspaper front pages for days.
Rather, they tell heartwarming stories about our own neighbors. It is a relief that there is a show like this that cares about little things and provides an honest glimpse into our society.