[Talk of the town]Japan, France, Korea team up

[Talk of the town]Japan, France, Korea team up 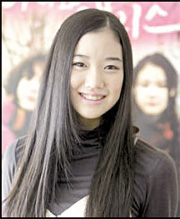 Yu Aoi, a top Japanese actress, has recently been asked to appear on an episode of a joint film project titled “Tokyo!” It is a production of three movie companies from Korea, France and Japan. The directors are Bong Joon-ho of Korea and Leos Carax and Michel Gondry of France.
The episode, titled “Shaking Tokyo,” is receiving attention from the Korean public because of Bong and Aoi’s collaboration. Bong is the renowned director of the highly successful film “The Host.”
Aoi appears as a pizza delivery girl who captures the heart of a man who has been a hikikomori, or recluse, for 10 years.
Other cast actors are Teruyuki Kagawa and Naoto Takenaka. Shooting began this month. All episodes of “Tokyo!” are scheduled to screen next year.
With Aoi, another prominent Korean actor Lee Byung-hun is starring in an American-French joint production, “I Come with the Rain,” as a gang leader. The film’s director, Tran Anh Hung, is Vietnamese. Other actors are Hollywood star Josh Hartnett and Takuya Kimura.
By Lee Seung-eun