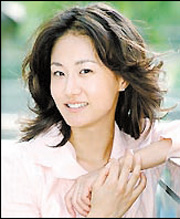 Actress Shin Eun-kyoung, 34, and her ex-husband Kim Jung-soo visited Seoul Family Court last Friday to file a divorce document, officially marking the end to their four years of marriage. Kim was the head of an entertainment company, “Good Player,” which used to be Shin’s agency.
The two wed in September 2003 and the following year Shin gave birth to a child who is now three years old.
Their marriage started to face trouble last June when Kim illegally used Shin’s private seal to misappropriate 400 million won ($424,800) for his entertainment company. Shin noted the lack of trust in the relationship.
According to a source close to the couple, the divorce is due to personality differences and economic troubles.
Kim was short of funds while producing two films, “Mission Sex Control” and “Between Love and Hate,” last year. He also had financial trouble in promoting a merger with Fantom Entertainment group.
Shin’s current agency, Oracle Entertainment, said, “Shin will have child custody rights and parental rights.”
“I am overwhelmed with shame to bring you such bad news,” said Shin, who is currently acting in the SBS TV drama “Bad Couple.”
She added that time is needed to overcome the present conflict.
Shin’s next project is “Single Mom,” directed by Moon Sung-il. The scenario is similar to the current life of Shin, who is now a single mother.
By Lee Eun-joo