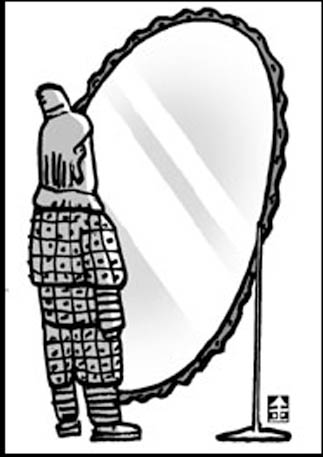 The First Emperor of Qin enjoyed the culminating power of the first empire, which united China. Qin established an empire, but it lasted only briefly due to cruel rule. The end of the dynasty was bitter indeed.
On the day the palace of Qin was finally taken over by Liu Bang, founder of the Han Dynasty, Liu’s key aide Xiao He suggested that he blockade the entire palace to scavenge for treasures.
The first treasure Xiao He confiscated was a range of books collected by the Qin Dynasty. The next thing was a large mirror that was known to be owned by First Emperor. It was the Mirror of Qin.
The Mirror of Qin was an odd thing. It showed a person’s figure upside down. Even more interesting, if you touched your chest while looking at the mirror, it would show all your bodily organs.
The mirror was therefore rendered as the treasure of treasures, for it showed not only diseases of the body but also a person’s mind.
One can imagine how the Qin Dynasty felt to obtain such a priceless treasure and also understand Xiao’s hurry to secure the treasure.
However, the first emperor used the mirror only to investigate those who opposed his ideas. The son of the first emperor forgot the value of the rare treasure. No wonder the Qin Dynasty collapsed after a short glory. Believe it or not, because of the power of the mirror, the Han Dynasty lasted for a rather long time. This is the legend that has entertained curious minds.
The story of the Mirror of Qin came to mind because of those who attempt to place blame on others’ shoulders.
Chief Police Constable Lee Taek-soon has been criticized for the lies he made before and after the arrest of Hanwha Chairman Kim Seung-yeon for being involved in a bar brawl. Now the police chief intends to penalize one of the deputy constables who criticized his behavior. One may wonder how his crooked mind keeps trying to satisfy his own wants, even while he is criticized by the public.
In fact, the Mirror of Qin probably did not exist. Nonetheless, the story survives by word of mouth, due to the presence of the mirror in the story. A mirror reflects one’s self. Before showing others’ faults on the mirror, one should first look at oneself . Constable Lee, who was quick to find fault with his men and punish them, should reflect on his own mistakes and previous behavior first.
The Blue House, which ignores the clear mirror of public opinion and intends only to protect Lee, should also stand in front of the mirror.