Reasons to be sorry

Reasons to be sorry 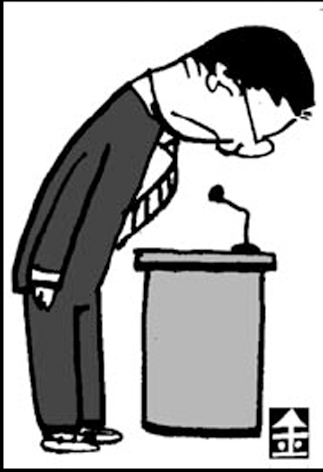 Politicians do not think they owe anybody an apology so long as they remain in power. History has recorded various occasions when kings who lost a war had to seek a pardon from the victor in humiliating circumstances, as in the case of Henry IV’s trek to Canossa, and King Injo of the Joseon Dynasty who asked for forgiveness from the Qing Dynasty after his defeat.
Former president Kim Young-sam, known as YS, is a man who would rarely admit a mistake. At his New Year’s press conference in 1997, during the fourth year of his presidency, he would not apologize, even though public discontent with his new labor law was rising. He refused to have talks with the opposition party and demanded to end the press conference three or four times when reporters asked difficult questions. The unfaithful and arrogant attitude of YS made him a lame duck at the end of his time in office. He had to bow his head to the country six times in the same year after his son was involved in a bribery case and the nation was afflicted by a huge financial crisis and had to ask for aid from the International Monetary Fund.
On the other hand, another former president, Kim Dae-jung, a k a DJ, would apologize at the drop of a hat. He tearfully apologized to the public whenever he lost an election. Based on the lesson that an arrogant attitude, like that of YS, creates a lame duck, DJ mortified himself in his New Year’s press conference during the fourth year of his presidency and demanded forgiveness three times. But that did not prevent him from making several apologies later for the bribery scandals involving his three sons and for secretly wiring money to North Korea in return for an inter-Korean summit.
President Roh Moo-hyun makes apologies even more rarely than YS. He never admits his errors even when the National Assembly votes against him, the Electoral Commission points out his wrongs or the Constitutional Court rules against him. Roh persisted when the ruling party deprived him of the party membership and when its members all left the party. Even when he was at risk of impeachment he never asked for the people’s understanding.
DJ recently demanded an apology from President Roh regarding his decision to take to the special prosecution unit the case of the transaction with North Korea for which DJ has apologized, illegal eavesdropping by the National Intelligence Service and Roh’s separation from the Democratic Party. Now that every presidential hopeful kowtows to whoever has votes, it is not that difficult to predict whose victory it shall be.