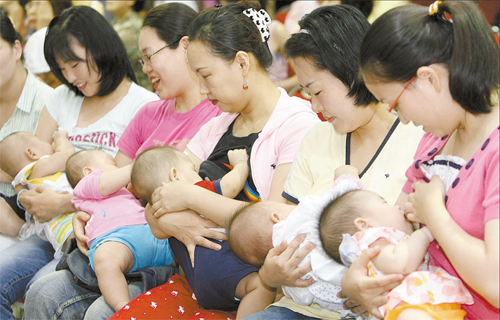 It seems breast-feeding in Korea has come full circle.
More Koreans are breast-feeding today as they did in the 1970s, but this time it’s more about health reasons than status.
Back in the 1970s, when the country was still in recovery from economic and political turmoil, most mothers in Korea breast-fed their babies.
“Breast-feeding back then was strictly a matter of finances and status,” said Kim Hae-suk, head of the Korea Breastfeeding Organization. “You gave your baby powdered milk if you were rich, and you breast-fed if you were poor.”
The 1980s saw a huge influx in Western culture to Korea, and powdered milk became readily accessible to the masses.
“Not only was it popularized, but the opinion leaders, including medical experts and media personalities, all truly believed that giving powdered milk to a baby was more nutritious than breast-feeding,” Kim added.
That trend continued well into the 1990s as the number of mothers who breast-fed plummeted to an all-time low.
More women going into the workforce contributed to the phenomenon, as women needed a fast and stress-free way to feed their babies while they were at work.
In 1985, according to the National Statistical Office, 59 percent of surveyed mothers breast-fed their babies without using any form of artificial milk. The percentage of mothers who breast-fed dropped to 11 percent by 1994.
Jeong Yu-mi, president of the Academy of Breastfeeding Medicine Korea, considers the influence of the media as one of the main reasons for the popularity of powdered milk.
“When you think back to those days, a majority of ads in women’s magazines were about powdered milk,” Jeong said. “There were all these beautified images of celebrities posing for ads, with a baby and promises, like this product will make your baby smarter.”
Recently, however, the trend switched again and more mothers are beginning to rely on nature’s nectar instead.
“Even since two or three years ago, people started to see that breast-feeding is the healthiest form of nutrition for the baby, as well as being good for the mother,” Jeong said.
The controversy surrounding powdered milk companies didn’t do much to help, either. Earlier this year, two leaders in the industry, Namyang Dairy Products and Maeil Dairy Industry, were charged with Fair Trade Commission law violations by lending funds to hospitals all over the country in return for monopolizing the powdered milk supply in the institutions.
Misleading ads have led to further public distrust of the industry. The World Health Organization has been pushing for laws against advertising infant formula (powdered milk for babies under six months old) and the Korean government has banned ads on television and in print for this product.
The law, however, is perceived as flimsy as companies have figured out ways to get around the restriction.
Companies like Namyang advertise formulas intended for babies over six months old in “infant formula” packaging, confusing the public and causing many complaints.
“In the United States and leading European countries, there are clear laws against ads for powdered milk targeting babies under six months old,” Jeong said. “In Korea, however, there are no such firm boundaries, resulting in a misinformed public and ad executives taking advantage of the situation.”
Furthermore, claims by consumers and researchers about finding germs in the formulas have added to consumers turning their back on powder formulas.
Gwon Seong-hee, a working mother of a 6-year-old, says she never used powdered formula because, “there is so much medical evidence these days about the advantages of breast-feeding. I couldn’t trust the companies to provide the essential nutrients for my baby during the crucial first years of his life.”
She added that breast-feeding provided a strong connection with her baby and helped her body return to normal in a short period.
Lee Su-jeong, also a working mom at a large corporation with an 8-month-old, agreed.
“If you look at leading countries like the United States, the number of women who breast-feed is much higher than in developing countries,” Lee said.
“Because they have more information on welfare, nutrition and medicine, they are realizing that the natural way of raising children, especially in nutrition, is best.”
Both moms conclude however, that workplace circumstances to support breast-feeding for career women work against them, although the situation is getting better.
“We have no rest room for moms,” Gwon said.
“When you are breast-feeding, you need to squeeze out the milk whenever it comes. I mostly went to the bathroom to squeeze the milk out and stored it in a bottle until I got home.”
Said Lee: “My company has a rest area for mothers. There is even a breast pump which is so helpful. I know that most working moms do not have this luxury, so I feel very grateful and lucky.”
To promote breastfeeding for working moms, Unicef’s Korean branch gave awards to six companies as being “mom-friendly spaces” during International World Breastfeeding Week in August. Among the firms recognized were E.land, GE Korea and Hyundai Construction.
Unicef Korea plans to advance this campaign to help moms take care of their babies’ health while they pursue a career.
The Seoul city government has plans to create more rest areas in subway stations for mothers.
At present, there are only six stations in the Seoul subway networdk that have rest areas.
“It was so challenging to breast-feed and balance a baby with a job,” Gwon said.
“I just hope other mothers on work sites get a sanitary rest area.”