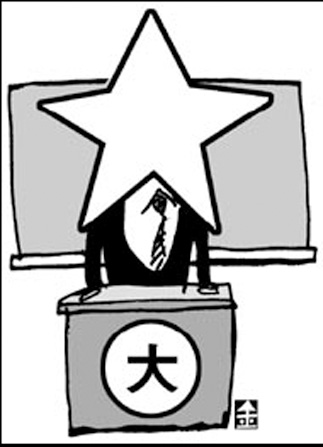 People are getting tired of revelations about fake academic degrees of artists and celebrities. Lately the revelations have focused on pop culture celebrities, particularly those who have achieved their popularity through an intelligent image. It is shocking to see how much Koreans worship academic degrees and the individual moral hazard that this creates, especially for aspiring celebrities.
Those who pretended to be alumni of universities from which they did not graduate received more criticism than others. They delivered lectures to students at their fake alma maters and some of were even awarded alumni honors. The relevant universities are bound to be questioned about their moral integrity in such cases, since they are likely to have ignored doubts about the genuineness of such people’s degrees. The universities might have turned a blind eye to the fakes in exchange for celebrity endorsements.
Celebrity marketing of universities has become intense. Almost all universities publish promotional booklets and produce commercials using celebrity alumni and appoint stars as their ambassadors. In events that test the power of each university, celebrities are also welcomed. During the admissions season, a battle royal occurs between the universities to attract stars and lure freshmen. Although stars are unlikely to be hardworking students because of their busy schedules, the schools want some of a celebrity’s popularity to rub off on them.
The fever for celebrity marketing is not confined to local colleges, middle- and lower-grade universities or newly established institutions where marketing is critical for survival. Even prestigious universities strive to host celebrity alumni, offering special graduate programs. Those schools then introduce the pop culture stars to their alumni networks.
A professor of film studies says the reality of our universities, which are increasingly marginalized, lies behind the recent fake degree scandals. Already the supply of academic institutions has exceeded demand and competition is getting fierce, while commercial awareness of universities is more valued than academic achievement. Thus universities want to promote prospective students’ awareness of their names even if that means hiring fake graduates and, to get more freshmen, they employ celebrities as professors after assessing their ability to make money. Hiring celebrities as professors is fine if they have the necessary credentials. Yet the core of the problem hinges on whether star marketing of universities ends up destroying the academies’ reputation.