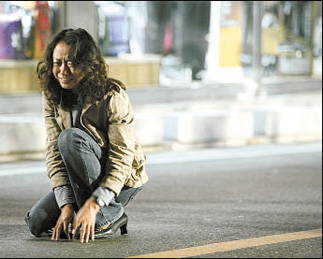 A critic once wrote that the works of Hong Sang-soo and Lee Chang-dong contain the essence of pain and joy, in that Lee finds desperation when in search of hope while Hong captures the desperation hidden behind the hopeful gloss we put on daily reality.
That’s a compelling description of Lee’s latest movie, “Secret Sunshine” (Milyang), which was nominated this year for best film in the official competition at Cannes.
As the heroine’s life approaches the depths of despair halfway through the film, the audience can also feel their emotions sinking fast into the dark void. Then toward the end, she slowly helps them to rise above oblivion, offering an ambivalent suggestion of hope.
Milyang means “Secret Sunshine” in Korean and the film questions the purpose of hope, faith and human significance. The way the director makes his points is consistently low-key yet revealing.
The film is set in the rural town of Milyang where Shin-ae (Jeon Do-yeon ― who won the best actress award at Cannes), a young widow with a son named Jun, starts a new life in her late husband’s hometown.
Shin-ae opens a piano school for young children, trying to cope with small-town life and the frequent gossip and unwanted sympathy dispensed by her Christian neighbors who try to take her to a church to save her from her miserable past.
However, her true misery begins when her son is kidnapped and he is found murdered near a creek by his oratory teacher.
On the day she returns from the district office where she had to fill out a report about her son’s death, she finally breaks down and walks into a revival meeting, which had been advertised on a street banner with the promise that it will heal “wounded souls.”
Shin-ae’s spiritual peace seems to last for a while, until she learns that her son’s murderer has, all-too-conveniently, been “born-again” as a Christian in prison and is enjoying a life of peace and forgiveness, even though she has not forgiven him.
In its depictions of the pain and loss suffered by Shin-ae, the film is intense, sad and sometimes extremely funny.
There is a tinge of irony about the self-absorbed faith practiced by many Christians in Korea ― like in the scenes of clapping and praying loudly in a public park. The film outraged Korean Christians, who mobilized protests to boycott it.
Ironically, Secret Sunshine is one of the most interesting religious films I’ve seen. It questions the notion of spirituality and forgiveness in ways that no other Korean directors of fictions or documentaries have dared to do in the past.
The director, a former minister of culture and tourism, questions and confronts the Christian faith head-on and that seems brave and historic in a society where churches play a powerful role in many aspects of life.
The film never loses its sincerity, confirming Lee’s trademark as a humanist director.
The film maintains a tight balance between tragedy and hope through the presence of quiet humor and the genuine kindness of the character Jong-chan (Song Gang-ho), a slightly uncultured but friendly car mechanic who takes a romantic interest in the widow.
Jeon, who is a local TV star, practically leads the story on her own, offering a biting glimpse into the life of a grieving mother.
The film does not end on a joyful note, but at least the heroine finds a way to reconcile with the world, which is good enough for a movie that has so much pain at its core.