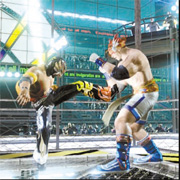 Virtual Fighter 5 or VF5 is surely this era’s top virtual 3D fighting game. It never ceases to amaze fans whenever an upgraded version is available on the market.
The graphics get better with details like a scar on a face or the shattering of blocks which seem practically real. The speedy yet smooth gameplay is mind-blowing as well.
The biggest change made on VF5 is in the controls. For long-time followers of the VF game, the controls are easy to use. However, first timers may struggle compared to their experience with the Tekken series. For VF5, the controls have become easier and first-timers can now land lots of punches on long-time players.
So those who are confident of their game skills should be wary as they might have their characters blown-up in mid-air by a first-time amateur.
Two additional characters have been added to the roaster. One is Eileen, a Chinese girl who masters monkey-style kung fu. The other is El Blaze, a Mexican masked wrestler. Both characters are quick and have eye-boggling technique. All the characters are well balanced, making a fight against the CPU or a human opponent a decent challenge.
The fighting skills of the other characters remain almost the same as VF4: Evolution.
Additionally there hasn’t been much change to the background either so for some players it may not feel like they are playing a new game but a continuance from the last series. All in all VF5 is a game that gamers will not regret purchasing; it is a definite keeper.
By Lee Ho-jeong