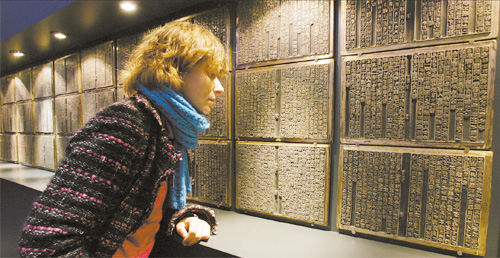 A German visitor looking at movable metal type from Korea exhibited during the annual Frankfurt Book Fair in 2005.


“Jikji,” a 14th-century Korean book made with metal-type printing, was on display in the first floor lobby at the United Nations’ headquarters in New York last month. The exhibition that featured Jikji ran for 40 days and was opened by Ban Ki-moon, the secretary general of the United Nations, with 200 UN delegates in attendance.
On the exhibit’s opening day visitors had the opportunity to print some pages using the traditional Korean method.
The exhibition was significant because it showed the world once again how Korea had advanced printing technology in ancient times, a fact which is a source of pride for many Koreans.
Jikji and metal-type printing are more than just artifacts of history. The fact that Korea produced the world’s oldest printed material using metallic tools is something that many Koreans hold in high regard.
The first edition of buljojikjisimcheyojeol, more commonly known as jikji, was published in 1377 at Heungdeuk Temple outside of Cheongju, Chungcheong and it predated Gutenberg’s Bible, the first metal-type book printed in the West, by 78 years.
The textbook was originally two volumes and intended for Buddhist students.
Unfortunately, only a single second volume remains and it is currently preserved in France’s National Library.
Jikji is believed to have been printed at a small regional temple and it is not in perfect condition. The words are not even in size and some were printed using wood engraving. However, it is highly regarded because it is one of the oldest relics of Korea’s cultural heritage and the only remaining example of the Goryeo Dynasty’s printing technology.
The biggest significance of Jikji is that it was made at a small temple, indicating that the movable metal printing skill was practiced extensively on the Korean peninsula at a time when the central government’s printing had been paralyzed by the dominance of China’s Yuan Dynasty.
It also proves that metal-printing had advanced to the point where even a small temple could print. This technique was passed on to the Joseon Dynasty.
However, the history of printing in Korea dates back far beyond the Goryeo Dynasty.
According to the Korean Printers Association, it is not clear exactly when Korea’s printing technology first began. However, experts estimate that it must have started in the third or fourth Century when Korea’s trade with China flourished and various methods for publishing records were introduced.
Before printing skills were developed records were engraved on stele (stone tablets).
The earliest engraved stele is the Jeomjaehyeon Shinsa Stele, which is thought to have been made in 85 B.C.
Next is the Gwanggaeto Stele erected in A.D. 414.

A monk looking at one of 80,000 blocks from the Tripitaka Koreana. [JoongAng Ilbo]

During the Three Kingdoms period (A.D. 18 to 688) Buddhist scriptures engraved on stone tablets became popular.
Buddhism was the biggest contributor to Korea’s printing history. Printing skills were developed to pass Buddhist scriptures from generation to generation, and mass printing advanced rapidly with the unification of the Three Kingdoms into the Silla Dynasty.
“Wood engraving was developed in order to spread Buddhist teachings,” writes Park Byeng-sen in “Korean Printing: From Its Origins to 1910.” “It is this spiritual need which stimulated technical progress. It seems that after the unification of the Three Kingdoms, Silla had a need for an ideological base with which to rally the three peoples. Buddhism was seen as a way to assure the prosperity and cohesiveness of the nation.”
It was in 751, during the Silla Dynasty, that the “Mugujeonggwangdaedaranigyeong,” was published. It is now the world’s oldest publication made with wood engraving.
Wood block-printing continued in the early Goryeo Dynasty. The best remaining example is the Tripitaka Koreana, which consists of 80,000 tablets and is preserved at the Haein Temple. The Tripitaka was developed for 15 years from 1259. The Tripitaka, according to Park, was manufactured to provide protection against barbarian attacks. Park notes in his book that people at the time believed that “Buddha had the power to transform all bad events at the time when they occurred.”
The first metal printing in Korea was in the 12th Century, during the Goryeo Dynasty. No precise date has been established by scholars.
However, various historic records indicate that movable metal-printing was practiced as early as 1232.
In the 12th century the Goryeo people developed a skill to produce movable fonts. The evidence is the movable copper type with the letter Bok, which is currently preserved at the National Museum of Korea.
The Goryeo people, who took pride in their advanced printing technology, developed a metal printing technique that was economical and efficient because so many wooden block prints and books were destroyed during frequent attacks by the Mongolians. 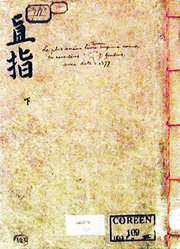 Jikji, the oldest publication to use the movable metal printing technique. [JoongAng Ilbo]

The printing skills of the Goryeo Dynasty were passed on to the Joseon Dynasty and, in 1403, the first movable copper type was used.
“This enterprise did not proceed smoothly,” Park noted. “Numerous difficulties were encountered, first of all with financing. Copper, which is used in the making of bronze had to be procured, as not enough of it was available in Korea.”
Although there were many initial difficulties copper movable printing did not disappear. Instead it was improved in subsequent years and new copper types were developed.
During this dynasty a significant event for the Korean people took place: the first printing of hangeul, Korea’s own unique alphabet, in 1447, four years after King Sejong announced the completion of the alphabet.
Today printing has grown to a different and more impersonal level. Words are typed in computers and printed with high-tech machines. Yet deep in the hearts of many Koreans. the first movable printing still remains a source of unshakable pride.