An experiment with pure beauty and motherhood

An experiment with pure beauty and motherhood 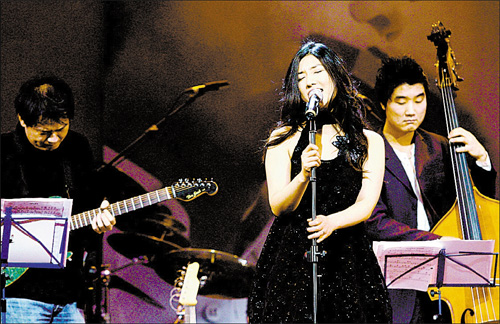 Jazz vocalist Jung Soo-weol is back with her fourth album “Now, to You.” By Kim Seong-ryong

Jung Soo-weol ― better known as Malo ― was Korea’s answer to Ella Fitzgerald in the 1990s.
Her scat singing (a type of improvisational singing without words) reminded the public of Fitzgerald’s “horn-like” experimental harmonies.
The 36-year-old jazz musician used her rhythmic voice to sing jumbled lines like “bippity-bippity-doo-wop,” an example of the phrases used by Fitzgerald in her scatting.
Before making her official debut in 1998 with the album “Shades of Blue,” Jung started performing at Daehangno clubs in central Seoul.
At that time, Jung was studying professional music at Berklee College of Music in Boston and had just made a visit to Korea. Audiences were pleased to hear Jung’s Fitzgerald-esque vocal.
But now, Jung is no longer an imitation of a Western musician, but a jazz vocalist with her own style. Her fourth album “Now, to You,” has been enthusiastically received.
On the album, Jung has broken down the elements of standard jazz and the free-flowing rhythms are now solely based on her emotions.
“I’ve always brought out the jazzy elements in my songs in order to distinguish the jazz genre from popular music,” said Jung. But her recent album was different. She worked it with one thought in mind: “Can I succeed if it’s not jazz?”
It took Jung two years to get away from conventional jazz approaches. The four-year gap after her third album allowed her to be reborn as a musician and to search for her own sounds in her work.
After releasing her third album “Cherry Blossom Sheds” in 2003, Jung got busy as a mother and professor, and music took a back seat for a while.
“Music wasn’t everything in my life then,” Jung said.
Instead of performing regularly she began working on the lecture circuit.
“I gave lectures at Kyung Hee University, Dong-Ah Institute of Media and Arts, Seoul Artspool Conservatory, Ajou University and Soongsil University,” she said.
Jung noted that her academic work shifted her career, but at the same time made her think about who she really was.
“It made me concentrate on music,” she said. That’s when Jung started to work on her fourth album.
“The ‘you’ mentioned in the fourth album title refers to music or the passion for music,” said Jung.
All songs on the album are composed by Jung. Lyrics were written by Lee Ju-yup, who used to be a journalist at Hankook Ilbo.
Though it was tough working on the songs as a mother, Jung managed to record at night after putting her child to sleep. “It was hard for me to concentrate, so, for example, the song ‘Playground’ was re-recorded three times,” Jung said.
In “Now, to You,” Jung integrated various genres, including a cappella and contemporary jazz. Most of her songs are played without drums.
“Instead, I’ve brought out the rhythm by using the guitar and piano,” Jung said. She added, “Compared to the cozy and rich sound of the third album, the melody of the fourth is more dry and distant.”
Now that Jung has found her own sound, she hopes to get back to standard jazz.
“I want to produce an album that focuses on traditional, conventional jazz styles,” said Jung.
Also, she dreams of performing at clubs, like she used to back in the late 1990s.
“The Daehangno clubs are special to me,” said Jung. “They help me keep jazz deep in my heart.”
Jung said that her performances in the clubs prevented her jazz style from getting rusty. Also, performing live makes jazz more exciting for her.
“It allows me to live life to the fullest, and most importantly, it allows me to be honest with my music.”
Jung said that jazz is a honest form of music with no artifice and working in this genre forces her to reveal more about herself.
“This is why I don’t wear make- up. Everything expressed should be from the inside.”
Jung will perform songs from her new album at the New Millennium Hall at Sungkyunkwan University this Saturday.
The concert begins at 7:30 p.m. Tickets range from 33,000 won ($36.50) to 44,000 won. For more information call 1544-1555.