[TALK OF THE TOWN]Secret signposts to future happiness

[TALK OF THE TOWN]Secret signposts to future happiness 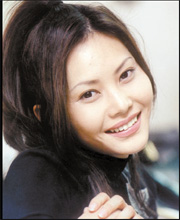 Some say love and marriage are two different things, but Chu Sang-mi and Lee Seok-jun have decided that they’re the same.
After a five-year love affair, the two will tie the knot on Nov. 5 at Onnuri Church.
The wedding will be private and officiated by Pastor Ha Yong-jo.
Chu and Lee met in 2003 when they were starring in the musical “The Sorrows of Young Werther.”
Since then, the two have dated secretly and signaled their emotions with a code.
“We blinked our eyes when saying ‘I love you,’” said Chu. “No one really noticed.”
But the secret signs soon became public when Lee publicly proposed to Chu on Jan. 4, after his “Hedwig” performance.
“He sang me a gospel song and gave me a ring in front of around 300 people,” said Chu. “On the night of the proposal, I fell asleep feeling blessed.”
Lee said he made his proposal after deciding that Chu had qualities that made her a woman whom he could respect in all aspects of life.
Chu said, “Until now, I lived only for myself but when I get married that will change.”
By Lee Eun-joo