A dance to the music of different countries

A dance to the music of different countries 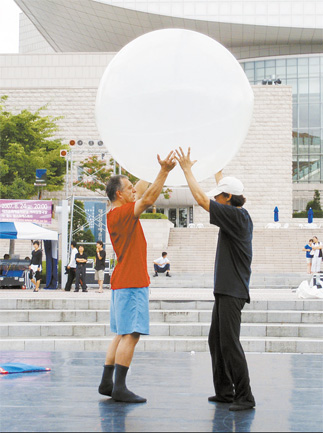 Philippe Olza and James Jeon rehearse for their Aug. 13 performance of “The GDEO Project” at the Daejeon Arts Center. By Kwak Su-young

Earlier this year Swiss modern dancer Philippe Olza received a surprise invitation to come to Korea from his former colleague, Korean ballet dancer James Jeon.
Nearly 25 years had passed since the two dancers last met. They were much more limber when they originally danced together in Maurice Bejart’s “20th Century Ballet.”
“After such a long time, it’s like you’re discovering someone in a different context,” Olza said. Jeon had since risen in the Korean ballet world to become the resident choreographer of the Seoul Ballet Theatre, while Olza left ballet altogether in favor of the more experimental side of dance.
“If you could graph our careers, James’s has gone like this,” Olza said, shooting his arm up diagonally through the air. “He developed as a soloist at a renowned ballet company and became a principal.
“Mine was more like this,” he said, wiggling his arm in the shape of a sinusoidal wave. “My career didn’t develop logically. There was my ballet period, then I quit dance. I was working as an actor, then I started working on some very different projects. I was an opera singer, then a choreographer, and then I started to dance again in the last four or five years.”
Despite their differences, when they reunited the two dancers discovered a mutual desire to collaborate.
“The wish was immediately there, from both sides,” Olza. Thus, the “GDEO Project” was born.
The title GDEO is the rough Romanization of the Korean expression “Geuraeyo,” which more or less means “That is so.”
The piece’s title is meant to straddle Korean and European cultures; likewise, the entire theme of the performance is about the exchange that takes place between two people of different cultures.
While Olza maintains that the GDEO Project is not exactly autobiographical, some elements of his reunion with Jeon shine through.
“The project is about meeting again after many years,” Olza said. “The dancers’ discovery shows the difference between those two persons. Jeon is Asian, for example, and I am European. You initially see the distance because of the years that have passed.”
At the start of the piece, which toured throughout Korea this summer, each dancer nonverbally introduces himself to the crowd. While Olza confines his movements to restrained, off-rhythm bending of his limbs, Jeon exhibits the wide, flowing gestures characteristic of ballet. But once the pair establish themselves in relation to each other, they begin to collaborate by using a manual pump to fill a large ball with air.
“When the ball becomes full, it represents the world which unites us despite our differences,” Olza said, emphasizing the blend of East and West in the GDEO Project. “We choreographed the dance together. We mixed many styles, such as martial arts movements, ballet and contemporary gymnastics.”
He also pointed out the music that accompanies the dancing. In one movement plucking sounds reminiscent of the kayageum, a traditional Korean stringed instrument, dominate, but they fall away later as the melody of a Swiss folk song takes over.
“The composer, Hans Koch, created this music by taking pieces in the same tempo from both countries and mixing them together,” Olza said.
In addition to working with each other, Olza and Jeon involved organizations from their respective countries. Seoul Ballet Theatre, the premiere ballet company in Korea, co-produced the GDEO Project. The Swiss Arts Council and the European arts organization Migros Kulturprozent also sponsored the piece in an effort to encourage exchange and participation in the developing arts community in Korea. Both the Swiss and Korean governments promoted performances of the GDEO Project on its Korean tour.
Jeon and Olza performed the piece as a work in progress at Seoul’s Kandong Theatre, the Seoul Korea Performance Art Spirit and the Mokpo Maritime Cultural Festival this past July. Following these performances, Jeon and Olza tweaked their piece.
Then, in August, they performed a more refined version at the Mokpo Mandangkuk Top Festival, the Busan International Beach Dance Festival, the Choon-Chun Dance Festival, the Gwacheon Hanmadang Festival and the Daejeon Culture and Arts Center.
“It’s interesting that while contemporary dance performances draw only a small audience in Europe, at these festivals in Korea, we were dancing for thousands of people,” Olza said. “It was quite an interesting cultural phenomenon.”
Despite the completion of the GDEO Project, Olza and Jeon are far from ready to separate. Rehearsals of the piece will continue through 2008 in both Korea and Switzerland. The artists plan to incorporate more visual elements into their current bare-bones set, as well as adding filmed segments and dialogue.
The GDEO Project’s Swiss premiere is slated for next summer at the Theater Roxy, Birsfelden in Basel, followed by a European tour.