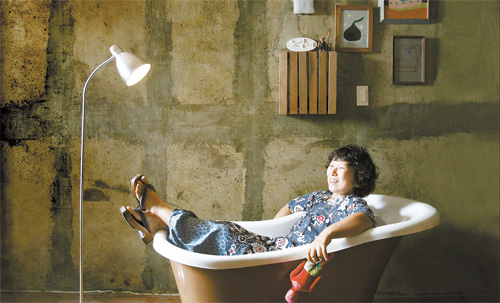 Noh Seok-mee at her Dongducheon house. Photo by Jeong Chi-ho

For Noh Seok-mee, an artist and illustrator, buying a home was an unexpected decision. She had friends who had tried to fix her up with men who could support her career and give her a comfortable home so she could concentrate on her work.
Instead she spent all her savings to buy a modest house with two bedrooms in Dongducheon, on the outskirts of Seoul.
“I see home buying as separate from finding a mate,” says Noh, 37 and single. “Even if I get married and buy new homes, I think whoever needs the house the most should pay more.”
After she bought her first home, Noh installed a new power lock on the door, put new tiles on the walls of her kitchen and moved in with her five cats. Now, she is looking to move to a larger house in Gapyeong, Gyeonggi.
“People joke that the joy of buying a mobile phone lasts for a day, a car for a month and a home for a year,” she says. “It’s true. There is a sense of accomplishment in owning your own place, even if its real estate value is not high.”
The concept of single-women homeowners is relatively new in Korea, where men are still seen as the primary breadwinner. Unless a woman expects to stay single, she waits until she finds a husband before buying a home.
In a recent survey by Bien-Aller, a local matchmaking company, 47 percent of women still think that home buying is the responsibility of their husband-to-be or his family. But things are changing.
More than half the males in the same survey said that women should equally or partially contribute to buying their first home. Roughly one out five household heads in Korea are women, according to the Korea Research Institute for Human Settlement.
There are other demographic factors which have persuaded more single women to become homeowners. One is that women are living longer and staying single longer.
A 2005 survey by the National Statistical Office reveals that the average age of death for a Korean woman is 81.9, while the average Korean male only lives until 75.
Studies show that increasing numbers of single Korean women have to pay more attention to buying homes, whether as investment after retirement or simply as places to live.
Experts encourage women to buy homes while they are single for three main reasons ― security, economic independence and as a retirement plan.
“A lot of single women I know who can afford to buy homes say they’ll wait until later,” says Cheon Myeong, the author of the recently published book “Women, Buy a Home Even if you’re Single.” “But if they don’t start looking for investment opportunities early in life, chances are their judgment could be too hasty when they are finally ready to buy a new home. The only way to tell tasty meat from bland meat is to sample as many different meats as you can.”
Cheon advises women to start on their real estate plan when they are single, because, in reality, many Korean couples can’t afford to buy their first homes on the man’s savings alone with the current high price of real estate.
The author even claims that there are more advantages than disadvantages when women buy homes, because women have a good instinct for picking the best products after many years of practicing bargaining strategies during shopping expeditions.
“If they start saving right after college, it usually takes an average of eight years before couples buy their first home in Korea,” she says. “But in reality for most couples, it takes about ten years or more, because many women tend to waste two years spending more than they should while they wait around to find a husband.”
In her book she advises young women to prepare their real estate plan in advance because they never know whether they will end up single, married or divorced 10 years from now.
Her book is attracting a following among single women and it sold more than 6,000 copies in the first three weeks after it was published.
“In the past young women saved for their dowry,” says Kim Tae-il, a marketing consultant for Moneta, a Web site for financial planning where 40 percent of the members are women. “Now the concept of financial management has changed entirely for young Korean women. They save to buy stocks and funds and make real estate investments for their future.”
However, there are some negative factors for single women homeowners in Korea.
The Korean government, which encourages couples to own just one home, levies a 50 percent property tax on the profits from the sale of a second home if the couple fails to sell one of their properties within three years of signing their vows.
Socially, single women with homes are thought to be much more selective when it comes to choosing their partner, and that can delay marriage.
“I wanted to move out from my parents’ house, and live on my own for a while,” says Lee Geun-young, 32, a teacher who bought her first home with a loan two years ago in Yeongtong, Gyeonggi. “Investment was secondary for me. If that means I am delaying my marriage, so be it. But owning a house doesn’t mean that I will stay single forever.”
Economic independence is undeniably reshaping the ways that many Korean women look for their marriage partner.
If the conditions for finding a spouse in the past were based on financial security, many women with homes now seek more emotional compatibility with their partners and are prepared to let money take a backseat. 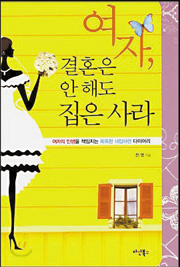 “The idea of more women gaining economic power in society means that they have fewer opportunities to find a partner who meets their social status,” says Cho Seong-nam, professor of social psychology at Ewha Womans University. “On the other hand, it could also mean that they have wider choices to select their partners because they are free from economic restraints.”
Koh Jin-ju, a single marketing researcher for Gallup Korea, who is planning to buy her first home within the next three years, agrees with the view.
“I think more and more Korean men prefer women who are economically competent,” she says. “Buying a home is a matter of security more than anything else.”