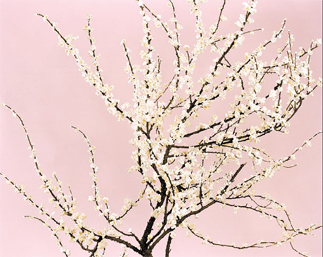 “Popcorns” by Koo Seong-yeon is a playful metaphor for things that are considered to have profound and superficial qualities.
For her latest series of photographs at Gallery Ssamzie, Koo has glued popcorn onto branches to look like blossoms on plum trees. She takes close-up shots of the branches against a pastel background and then prints them using a special process.
Her photographs make reference to Sagunja paintings, a form of traditional Korean art that depicts four plants ― the plum blossom, orchid, chrysanthemum and bamboo ― which were cherished by early Korean scholars who especially appreciated them as paintings on folding screens.
Koo’s photographs are particularly interesting because she juxtaposes the idea of Pop-art with a traditional genre of painting that subliminally conveys values like integrity, courage and nobility. Plum blossoms, which bloom in the cold at the end of the winter, have long been seen as a symbol of endurance in Eastern culture.
The contrast between plum blossoms and instant popcorn is also a metaphor for painting and photography, both of which juggle artifice and reality.
Koo’s earlier photographs in the series appear more painterly than photographic. They deliberately mimic the original form of Sagunja paintings and are blurred to create an illusion of flower petals. 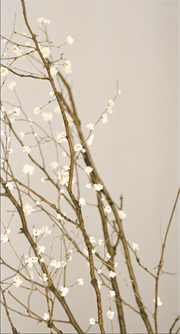 Her later work, however, turns raw as it includes the chopped stumps of a tree branches or focuses on larger shots of the branches that make the artificial nature of the plum tree more evident. The pastel background appears more digital than painterly as the series develops; the trees look more playful than graceful.
In a way Koo’s works are all about the art of manipulation. In an earlier series of photographs, she puts together two opposing elements that are attractive and repulsive, like pieces of broken glass stuck into sausage meat, radish or bread. In another series she stretched ivy across the walls of a living room.
The image suggests that the ivy is growing to cover the room, but in reality the plant is plastic and was installed by the artist.
Koo also questions ways in which we associate and develop meaning through different objects in a work of art.
For example she lays a black butterfly on top of a white bun, or drops moss on an egg or grilled mackerel, trying to trigger a narrative as if there are meanings beyond what you see. In effect, she’s playing with the audience’s perceptions by throwing random objects at each other.
All of Koo’s works question the nature of art.
The works are amusing, because the audience is seduced to look closer at the alluring surface of the images but they always find a playful secret that contradicts the image’s facade.

“Popcorn” by Koo Seong-yeon will be at Gallery Ssamzie through Sept. 16. To get to Ssamzie, go to Anguk Station, line No. 3 exit 6 and walk 100 meters down the main street. The gallery is inside Ssamzie Market. For more information call (02) 736-0088.