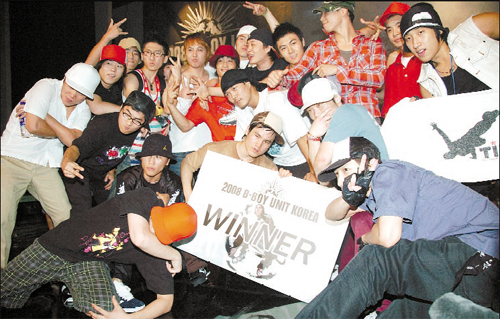 Head spins, windmills and air-tracks are just a few of the amazing break-dancing moves that will be on display during the battle of the world’s top B-boy crews, which takes place this weekend in Seoul.
The first international KB B-Boy World Masters competition, sponsored by Kookmin Bank, will be held at Olympic Hall in Olympic Park, southeastern Seoul on Saturday.
The crews who will battle include Mind 180 and Rock Force from the United States, Mortal Combat from Japan, B-town All Stars from Germany, Pokemon and Phase-T from France plus Extreme and T.I.P from Korea.
T.I.P, or Teamwork is Percentage, won a spot in the competition after defeating Soul Kingz during the Korean preliminary round for the 2008 B-boy Unit World Championship.
Thus T.I.P is currently regarded as the No. 1 B-boy crew in Korea. The team members have appeared in several television commercials, including once for the mobile phone company Anycall.
The other participating teams are also well-known for their outstanding skills and have, in numerous cases, won international competitions.
Mind 180 of the United States consist of B-Boy Casper, Beast Mode and Milk, who are currently considered the world’s best technicians. The team won the 2007 B-Boy Unit and B-Boy Evolution as well as last year’s U.S. B-Boy Unit.
Rock Force Crew, which was first established in California in 1983, has won various international competitions including Freestyle Session, B-Boy Masters Pro Am and Rock Steady Anniversary.
Japan’s Mortal Combat came in second at the 2007 B-Boy Unite World Championship. They also ranked fourth in the 2006 Battle of the Year competition.
Phase-T were the winners of the 2006 B-Boy Unit World Championship and the 2005 Chelles Pro Paris. 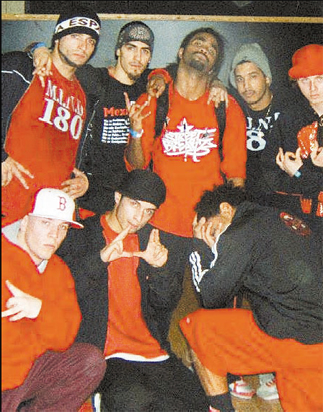 T.I.P of Korea. T.I.P and Mind 180 are among eight teams who will battle each other at the first KB B-Boy World Masters tournament in Seoul on Saturday. Provided by Issue Caster

Pokemon Crew were the winners of the U.K. B-boy Championship last year and Red Bull BC One in 2005.
B-town Allstars was the winner of the 2007 Red Bull Beat Battle and has won the Battle of Berlin three years running.
Extreme Crew, is one of the most popular b-boy crews in Korea. The team earned global recognition when they performed “The Ballerina who Loves a B-Boy,” at the Edinburgh Festival last month and won positive reviews from the U.K. media.
The winning crew will be taking home a $15,000 prize while the runner-up will get $10,000.
The third prize is $5,000 and the four crews with the most votes from the audience get $2,000.
In addition to the B-boy battles, “Marionette,” a B-boy musical, will be performed and their will be an appearance by top K-pop singer, Lee Hyori. Admission is free but reservations must be made. See www.kbb-boy.com for more details.