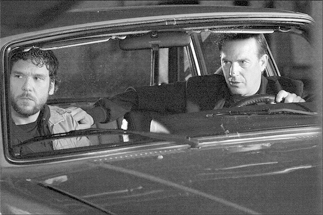 Earl Brooks prays for serenity and gets nightmares from hell.
As he should.
I steeled myself for some graphic violence and I knew there would be nothing edifying in watching “Mr. Brooks,” a serial killer movie, but I was curious for a couple of reasons.
The film was shot in Portland, Oregon, near my hometown, and it features William Hurt, an actor I’ve liked since his early days at the Oregon Shakespeare Festival in Ashland, where I lived for 10 years.
Played convincingly by Kevin Costner, Brooks is a rich business owner just named man of the year by the Portland Chamber of Commerce. He has a good wife. And he’s addicted to killing. The movie does not explore his past. We don’t learn why he is broken inside or what happened to warp him or feed his gnawing compulsion.
Hurt, perfectly cast, is Marshall, the cunning liar in Brooks’ head, whispering in his ear ― cajoling, sympathizing, insatiably demanding. When Costner talks to Hurt, is he talking to the devil? Where does that voice come from?
The film is unsettling because Brooks reminds us that real white middle-aged serial killers have terrorized the Pacific Northwest, namely Ted Bundy, the Green River killer and Robert Yates ― chameleon monsters who functioned in society.
This is not a pleasant way to spend $7 or two hours, and there is a confusing side story about a Portland police detective played by Demi Moore. It adds even more gun violence.
Costner plays Brooks with frightening, stoic, controlling realism. This is not a feeling human being. This is a detached observer, a ghost in his own life.
His personality is utterly compartmentalized. His murder closet is immaculate. In one chilling scene Brooks is unexpectedly handed photographs of his victims while talking to his daughter. But Mr. Brooks never breaks stride, cooly counseling his daughter while viewing the carnage before him.
When Brooks attacks in his blood-lust hunting, I had to turn away a few times. The portrayal of the rush that Brooks gets from taking another human life is disturbing.
Throughout the movie Brooks uses the Serenity Prayer to fight his evil impulses. He attends an Alcoholics Anonymous meeting. He stays clean from killing for two years. But it is too late. The cobra has already struck. We learn later that he has been killing for many years.
I spoke briefly to Koreans after the movie and one young couple said the film was inappropriate for anyone under 17. An older couple found it boring.
I suppose the film has educational value for police and therapists who must battle these demons. And the film can spark debate and awareness in a culture of violence that must deal with this horrific reality.
Is there a cosmic battle between good and evil for the control of human hearts and minds? Is there personal evil? Religion, science and psychology may disagree. But a wise Nazarene once said we battle against things unseen, and to be careful of our thoughts.
The late psychologist and author, M. Scott Peck, best known for “The Road Less Traveled,” wrote another insightful book called “People of the Lie.” In it Peck was convinced, based on years of therapy, that some people are possessed by evil.
In discussing the film with a friend from Seattle, I was reminded of Bundy, who as a boy saw small animals tortured and read increasingly violent pornography. The film reminded me of the importance of consistent parenting, of raising children to guard their thoughts, to be kind to animals, to learn to accept no for an answer and to cope with emotional flooding. The film raises a dilemma for recovery programs. I read that Jeffrey Dahmer once attended AA. If criminals confess in an AA meeting, are they protected by anonymity?
A cornerstone of 12-step programs is honesty. Members try to be true to themselves, to avoid sick secret contracts with themselves. To pray for enemies. To let go of hate. To endure suffering. To help others.
The movie also reminded me of two great books by C.S. Lewis, “The Screwtape Letters” and “The Great Divorce.” Both examine human selfishness and temptation in great depth.