A place where the monkeys seem strangely familiar

A place where the monkeys seem strangely familiar 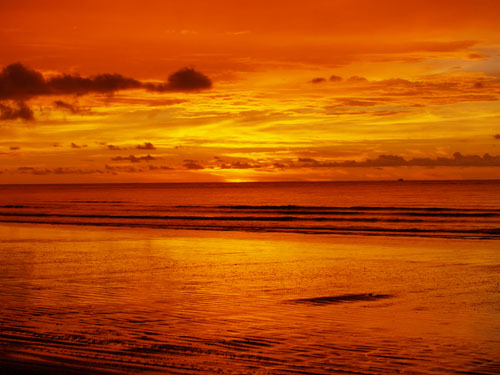 Sunset over the South China Sea at the Beringgis Beach Resort near Kota Kinabulu on the island of Borneo.

Let me get one issue out of the way. No. We did not have to go to a single shopping mall.
We took a Hana Tour jaunt to Borneo, Malaysia. And Hana has a reputation for taking its clients on endless excursions, where shopping is the main item on the bill.
Our trip was titled a “freedom tour,” and it lived up to its billing.
We wanted the “freedom.”
Of course, being free, we shelled out a few hundred thousand won (a few hundred bucks) to take two tours. So, who is the sucker?
The whole trip came about when friends of ours told us glowingly about their trip to the island of Borneo in Malaysia.
Warm weather. Beautiful beaches. Exotic animals. And, most importantly, inexpensive. Plus, by a happy accident of scheduling, I had a two-day workweek so it was easy to get the vacation time.
My wife, who speaks Korean, found the deal on Hana, 550,000 won per person for airfare and four days, four nights in paradise. And breakfast. We traveled with a 3-year-old and an infant, which, by the way, I would not recommend. Seriously. Don’t do it.
Our five-hour plus flight seemed to take days. The kids didn’t sleep so neiher did their parents. The good news is that we flew Korean Air direct to Kota Kinabulu.
At the airport, our cheery Hana representative picked up ourselves and one other couple, even though it was close to midnight. She gave us a rundown of what to expect on the island and some tips. Even better, she didn’t seem fazed by shouting over our 3-year-old’s screaming temper tantrum. He wanted to ride the bus, not the Hana van that took us to our hotel.
Now, fair warning, Hana did try to get us to upgrade our hotel when we booked the package.
However, we declined.
It would have cost 600,000 won more (200,000 won per person) for the trip and just didn’t seem worth it. Our hotel, the Beringgis Beach Resort, seemed fine on the Internet.
Well, this is not exactly shocking, but the Internet can be misleading.
The grounds of the hotel were lovely, with a pretty courtyard, a clean pool and a setting along the South China Sea that produced two of the most beautiful sunsets I have ever seen. One night, a herd of domestic water buffalo strolled past on the beach. We also saw horses several times streaking past. The kids loved the pool, which had a slide, and the included breakfasts were tasty. The staff at the hotel were great. 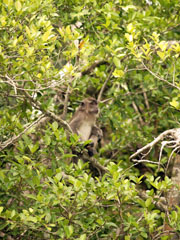 A monkey on the Garama River.

However, our room was another story. The bathroom of our hotel had an odor that never went away the entire time. Rust streaked the aging bathtub’s caulk. The electricity was spotty, the television had no remote and the door had about a 1 centimeter gap ― plenty of room for bugs and small lizards to join us. Our view? A construction zone. The hotel is expanding, and each morning our alarm was the sound of bulldozers rumbling and hammers swinging.
The biggest frustration? Location, location, location. We were in the middle of nowhere. It was about a 25- minute cab ride (about $15 each way) to Kota Kinabulu. And since the hotel had no ATM, and we hadn’t thought ahead to bring cash or traveler’s checques, we had to make the trip into town twice just to get cash.
Plus, the restaurants were limited. The beach resort had only two, and one was reserved every meal for a group of Malaysian teachers staying at the hotel for a conference. The food at the other restaurant, next to the beach, was disappointing. The satay chicken with peanut sauce was a keeper, but most of the rest of the dishes we ordered were uninspiring. The meat tended to be overcooked and overspiced. Our 3-year-old even ignored the pizza, which was basically a piece of thick bread with some melted cheese on top.
After getting our bearings and a nice, red sunburn on the first day, we took our first tour on day two. It was a trip to Sapi Island. 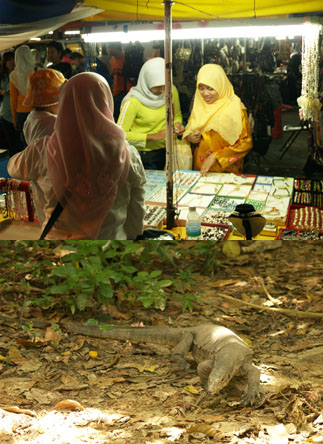 Top, The night market in downtown Kota Kinabalu. below, a lizard on Sapi Island. By Brian Breuhaus

If it’s possible for a tiny isolated island in paradise to be a tourist trap, this was. We got picked up from the hotel, then zipped to the island on a speedboat. Once we got off and paid our park entrance fee (about $7), we got herded over to the lunch table. There, we got snorkels and life jackets, and were sent on our way. We found a shady spot near the beach (that sunburn was killing me) and played with the kids. It was good, until I spotted a giant lizard about 10 feet away. I don’t know if they eat babies, but they are certainly big enough to do it. Our 3-year-old saw it, too, then ran right up to it. Turns out the lizard was even more scared of him. We looked around and spotted several more. After a buffet lunch of steamed crab, shrimp and chicken, we went to the other side of the island and floated in the coral water. That was a highlight of the trip.
After another quiet day of dodging intermittent rain, our final day arrived. We relaxed until about noon, then started a crazy journey. We hopped on a bus, took a 2-hour ride and found ourselves in an open air boat. Unfortunately, other kids grabbed the smaller life jackets, so there were only adult ones left for us. It ran down to our 3-year-old’s ankles. Then it started to rain.
As we were moseying down the yellow-colored Garama River, we saw plenty of monkeys in their natural habitats. It was unspoiled nature, with no homes around. Then our guide casually mentioned that he often sees pythons and crocodiles in the river. 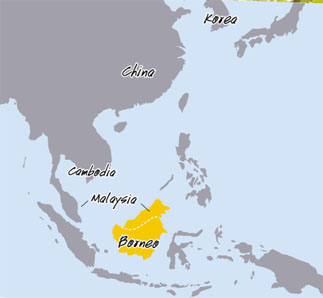 Well, we didn’t see any pythons, but did see a tiny crocodile. Safe to say there was a mother around somewhere nearby.
Despite it all, the cruise was probably the best part of the trip. Seeing proboscis monkeys ― said to look like Westerners because they have a giant nose and a pot belly ― in their natural habitats was a real thrill. We scarfed down dinner, then got back on the bus and went straight to the airport.
Two hours later, we were on a plane heading back. This time the kids slept and I did, too. My poor wife stayed awake, holding the baby in her arms.