Lollipop boys and their boo-hoo moment

Lollipop boys and their boo-hoo moment 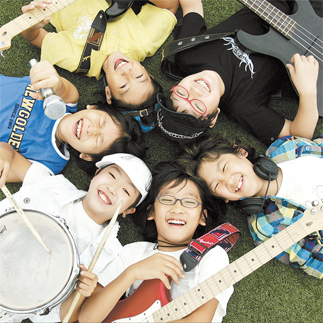 The members of Fenneky pause to have some fun in a Seoul park as they battle their way to the top of the Korean pop scene. By Jeong Chi-ho

Last year, music producer Jeon Hyo-kyoung uploaded a video of five children aged 11 to 13 singing the Caterpillar’s late 1980s song “To You,” on Pandora TV, a Web channel that offers user created content (UCC). It got a mixed reaction.
Despite criticism that the kids had not taken the classic song seriously, the three-minute video got 33,058 hits, 585 people made comments and 66 downloaded the video to their individual homepages.
In no time, the kids became the latest stars to be born via UCC.
The band then began performing offline as Fenneky ― the name is an abbreviated form of Fennecus zerda, the fox in “The Little Prince,” the famous children’s book by the French aviator Antoine de Saint-Exupery.
The average age of the group is 12, making it Korea’s youngest ever rock band.
But, as Mozart proved, youth has rarely been an obstacle to musical talent and the passion that Fenneky displays toward their music is as strong as adult musicians.
“My school teacher doesn’t want me to become a rock star,” said the 12-year-old keyboardist, Lim Chan-seok. “She is worried that I will neglect my studies. But I’m more than happy with my life now.”
Lim isn’t the only one who likes music more than studying. In fact, music, for these kids, is more important than anything else.
“Some friends envy me because I get to appear on TV,” said the 11-year-old drummer Kim Jun-ho. “They ask me to get the autographs of other celebrities, but I’m a star myself.”
“The Beatles are my favorite group,” said the group’s leader, Baek So-myoung. He said that the soft melody of “Let it Be” moves him and touches his heart.
Lim interrupted, “We’re a rock band ― my favorite groups are Crying Nut and No Brain. [two popular Korean rock bands].”
Without hesitation, Lim started singing Crying Nut’s “Let’s Ride a Horse,” head-banging and shaking his body as if the beat could actually be heard.
At the same time, vocalist Baek Won-jo started singing “Goodbye,” a ballad, and Baek So-myoung started singing their hit single, “Hello.” Soon all of Fenneky were humming along to “Hello.”
“Our single is about bringing hope to children,” said Park Joo-hyoung. “The rock genre itself is honest.” 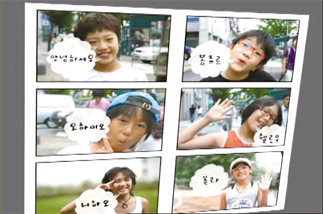 The lyrics of “Hello,” produced by Kim Tae-hoon, are simple, straightforward and cheerful. It includes these lines, “Hello everyone. Why do you have a frown on your face? Let’s smile and say hello to each other.” And, “Do you know who lives next door? Go and say hello first.”
Fenneky’s “Please Don’t Leave” is about children whose parents are divorced and “Goodbye” is dedicated to friends who have to part due to studying abroad or transferring between schools.
“Through Fenneky’s songs, children should realize that music is fun to play and enjoy,” said Jeon Hyo-kyoung, the Director of RPC Media, the agency that created the group. “Many popular songs out there are harmful to children because of their lyrics and the way adult pop stars dress and behave.”
Five members of Fenneky were selected through an audition by RPC Media last summer and one was picked early this year to complete the group.
According to RPC, competition for places in the band was intense.
“The judging criteria was not wholly based on musical talent,” said Jeon. “We also looked for children who had perseverance and a patient character.”
Jeon said that musical talent can be improved over time through practice and training whereas it takes a lot more time to teach a person to have a good character.
Some of those selected had prior experience playing in concerts or acting in dramas.
For example, when Kim Jun-ho was eight, he had a role in “Music Friends,” a segment from “Ppoppoppo,” a long-running kid’s show similar to Sesame Street. He also appeared in KBS’ “Open Concert.”
“The day I auditioned for the show was the day I proclaimed myself a star,” Kim said.
Lim, who looks like Rain, Korea’s popular R&B and pop singer, also has experience performing at the MBC Mud Festival in Daejeon.
“It was a dancing competition ― I danced Rain’s “Ways to Avoid the Sun” in front of 20,000 people,” said Lim. In the end, he received the Mud Prince prize.
“I showed courage on stage that day and I continue to do that today,” he added.
But, as kids are kids, practice isn’t that easy.
“We have to practice a repertoire of 20 songs,” said guitarist Park Jae-hee. “I get frustrated when there is no harmony during the sessions.”
“It’s even harder with school. Fenneky practices every Sunday, Monday, Tuesday and Friday from 4 to 7 p.m. But that’s not all. They have assignments related to the band’s performance schedule that they have to practice individually at home.
“It shows right away if you haven’t practiced the night before,” said Park.
Park’s day starts at 6 a.m.
“Because of late-night practices, I’m often late for school.” He said that friends tease him and say, “You’re not a popular star, how come you’re late?”
Park’s greatest musical difficulty comes when he has to learn new sounds for his guitar, although he adds, “Of course, the decimals and fractions I have to learn at school are much tougher.”
Director Jeon also talked about the drawbacks of coordinating a kid’s rock band.
“Each member is unique,” Jeon said. “This can be helpful in the long run as the kids get older but right now, it creates conflict.”
She explained that introverted members have a hard time mingling with the more outgoing kids.
“Also, kids get hurt by the smallest things,” Jeon said. She described a time when Fenneky was invited to perform on the SBS TV show “Star king,” a show where people with extraordinary talents compete to win money.
The members were hurt because they didn’t win first place.
“Each member practiced many hours before and the judges were quite complimentary about their performances,” said Jeon. “This gave the kids hope of a victory, but Fenneky lost.”
Once the shooting was over, all members started crying.
But kids are simple and their emotions can change in a heartbeat. The band’s “Boo hoo, I want my mommy” moment was over when a young female fan gave them a gift.
“When I first planned out a kid’s band project, many people told me I was out of my mind,” said Jeon. “They said that compared to the emotional input and investment, there is too little reward in Korea’s entertainment business for such a project.”
Jeon disagreed because she saw a uniqueness to the idea. “Kids are different,” she said. “There are many things that the group can do.”
For example, Fenneky was invited to the Blue House to perform on May 5, to celebrate Children’s Day.
“Music can be learned,” said guitarist Park Jae-hee.
His dream is to be able to play all the musical instruments in the world and to perform in all genres including soul, Latin, disco, blues, funk and punk.
Though that may seem far-fetched, these kids have endless possibilities ahead and nobody can deny them their dreams.