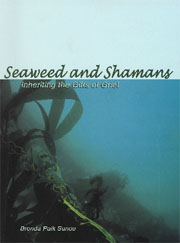 Seaweed and Shamans: Inheriting the Gifts of Grief

Is anything more painful than the death of a child?
In her book, “Seaweed and Shamans: Inheriting the Gifts of Grief,” Korean-American writer Brenda Paik Sunoo presents essays written after the sudden death of her 16-year-old son Tommy in 1994. The young man collapsed while playing basketball in Irvine, California. The cause of death was congestive heart failure due to chronic asthmatic bronchitis.
The essays are called gifts, and they portray a third-generation Korean-American mother’s passage through grief and renewal.
It is a rugged, uneven passage, as she notes in her introduction.
“My intention is to share my odyssey through grief. I hope my path of renewal will inspire yours. Be patient and attentive, though. It won't happen overnight. Grief drifts in and out like a ribbon of seaweed ― floating ashore one wave at a time.”
Sunoo writes that the book is not a griever’s manual.
“It is a memoir of intense emotional labor, discovery and inspired growth. At each moment when I thought I wanted to die, someone or something came to me as a gift: a book, a legacy, a mentor, a dream, travel adventures, nature, restored health. Thank God I paid attention.”
The author says that the loss of a child is like losing the future. At first, the grief weighed on her so heavily that “getting out of bed is like trying to lift a giant redwood off your chest.”
A friend tells Sunoo that her book is a movement toward healing, an honest account of what it was like, not a lesson plan for recovery. And that movement hurts, especially on anniversary dates.
“Although we had survived the first year, the second felt worse. Once you’ve buried the dead, paid the funeral bills, survived the first holidays without your loved one, and possibly, just possibly, packed a few of your child’s belongings, reality rams its way back into your life. You stare into the void of a pathless universe and wonder, what now?”
Sunoo sought redemption by working on her mind and body.
“I've learned to honor my body, not fear it,” she writes. “I no longer worry about drowning when I step into a swimming pool. For when I kick my legs, I am awakening two worlds. Tommy’s and mine. Facing the clouds, belly up, I watch for signs of my younger son and swim for him. Sixteen laps. Breathe in. Breathe out.”
While working on the book, Sunno was often asked how others would handle such a tragedy.
Her answer?
“Simply, in their own way. The human spirit, quite thankfully, is more resilient than we think.”
Sunoo recently recently visited Jeju Island to do research on the women divers.
She and her husband Jan moved to Hanoi, Vietnam in 2002 for his work with the International Labor Organization. She does freelance journalism and provides grief therapy at www.sharegrief.com.
In her epilogue she writes, “You may wonder if we finally healed? If being healed means living your life more meaningfully, and accepting the bittersweetness of it all, I would say, yes. Laughter and joy did return into our lives.”