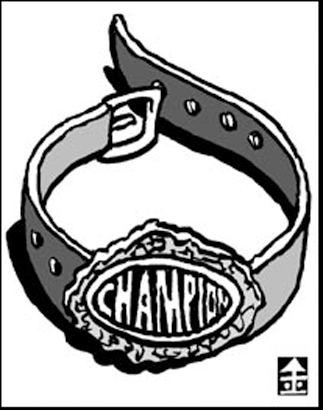 Wherever there is competition, there are winners and losers. The one who defeats all of his rivals becomes the champion. Once joining the competition, the ultimate goal is to become the champion.
Whether amateur or professional, an athlete or a businessman, no one aims to come in second or third when competing. Becoming a champion once does not end the competition, either. Many contenders keep challenging the champion.
The defending champion can remain at the top only after he defeats all of the challengers. Thus, “champion” is a temporary title. When someone becomes a champion, he or she is not guaranteed the position for eternity.
Champions exist in certain areas. In sports, athletes compete in different categories, weight limits and industries; businessmen do business in their own fields. There are no champions of all categories.
A champion is the best in a limited area. Champions are also limited to certain geographical areas. There is a champion in a town and there is a champion in a region. There is a champion in a country, in a continent and finally, a world champion. In most championships, contenders go up this pyramid. A world champion is at the summit of the pyramid, of course.
The world “champion” means not only the person who wins the competition but also the person who is committed to the cause. Those who commit themselves to big causes, such as the environmental or consumers’ movements, are also champions in a sense.
In this sense, the duels of knights in the Middle Ages in the Western world were designed to choose a champion who is also committed to a bigger cause. Knights had to win duels to prove the causes they believed in, for instance, honor or patriotism.
This year, the “Summer Davos,” or the World Economic Forum, was held in China’s city of Dalian.
The official title of the meeting was the Inaugural Meeting of the New Champions. People representing companies that would become world champions in the future gathered for the event.
The WEF’s requirements for the new champions were strict. The business’s annual sales had to be at least $100 to $150 million, and the annual growth rate had to be at least 15 percent.
Those firms must expand their business outside traditional industries and their management must have the vision to lead industries of the future. These companies can be champions in the truest sense, who not only win the competition but also realize the bigger cause of developing for the future.